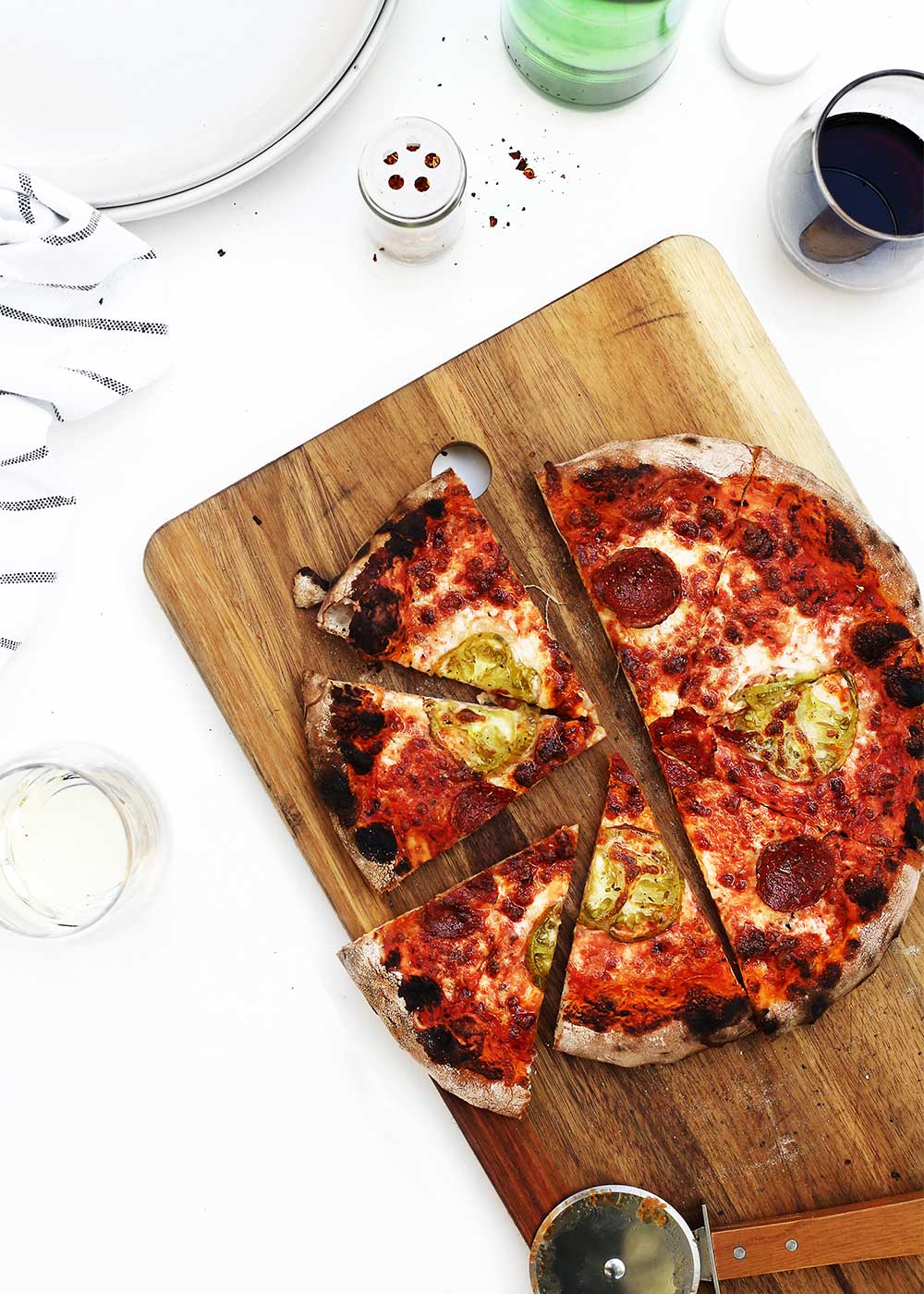 The 3-part pizza mini-series continues today with Part 2: Wood Fired Pizza Dough. Catch up on Part 1: The Gear and Part 3: The Sauce. I wrote a post over a year ago about how to make really good homemade pizza. That recipe carried us through years of pizza making. I thought we’d use it in our outdoor oven too. But in true fashion, Kev and I had differing ideas about our pizza. He wanted something closer to a traditional Neapolitan crust, while I wanted something a bit more non-traditional. 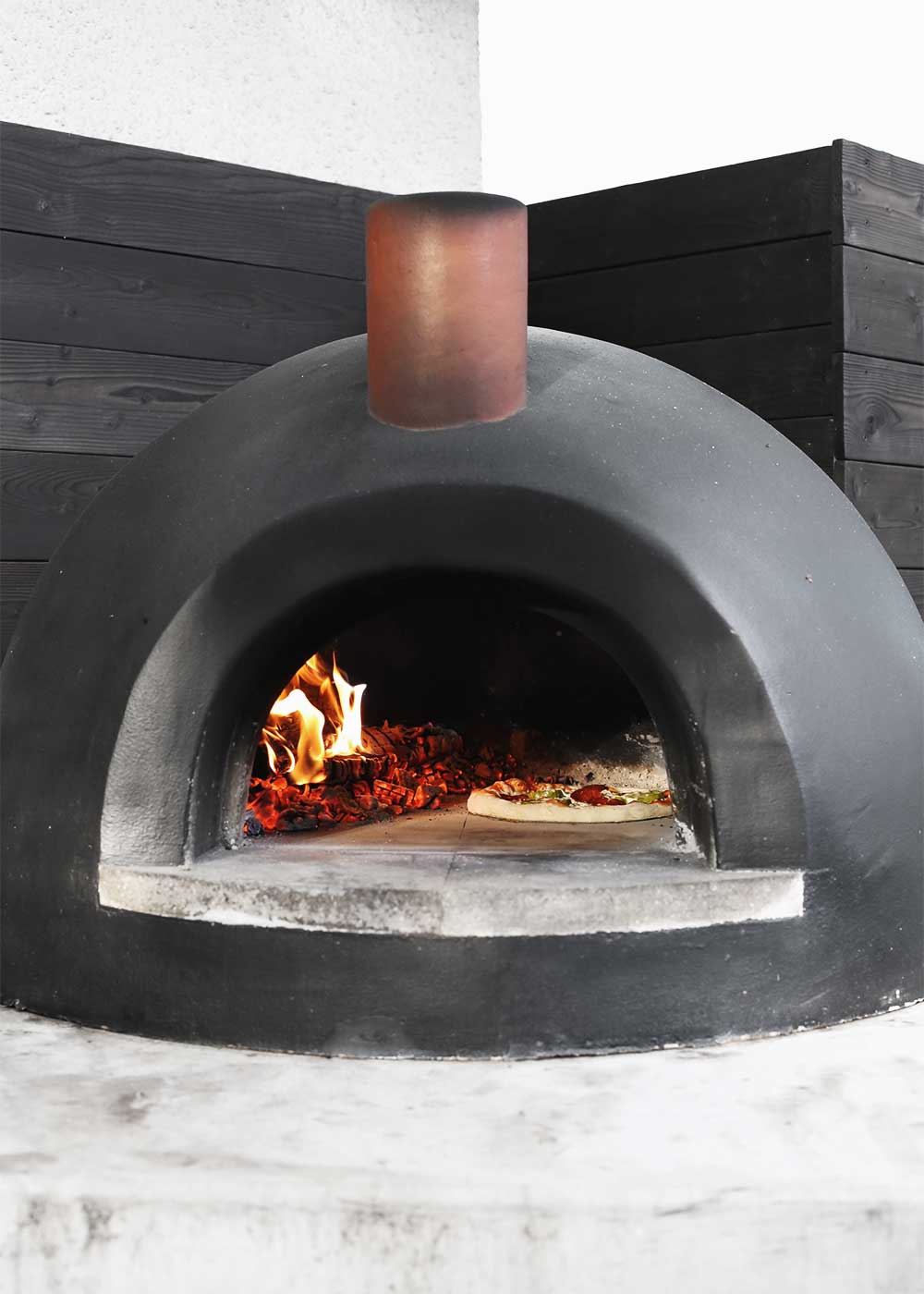 The Story Behind the Wood Fired Pizza Dough

We had a dough-off. A lot of dough-offs. Under the high heat (around 800°F), my trusty dough couldn’t compete. I lost.

We continued to tweak the recipe over the summer—to the point it was so good, we didn’t want to go out and pay for pizza. In the end, we landed closer to a New Haven-style pizza compared to a Neapolitan. After spending two years in New Haven, we fell in love with this style of pie. (For the pizza purists out there, this pie doesn’t land firmly in either category.)

Like any good Neapolitan pizza, we kept the chewy crust but cooked it longer and hotter to achieve a crispy shell like New Haven pizza, with hits of black char around the edges. After eating a New Haven pie, your hands will be happily coated in black dust. There’s nothing better. (Side note: New Haven pies are coal-fired. Our oven is wood-fired.)

Here’s what cooking pizza in our Forno Bravo wood fired oven looks like. It’s a two-person job over here, and we’re still total amateurs. But I feel really lucky that Kev and I get to have a shared hobby that will take us a lifetime to master. Currently, I carry the title of wood fired pizza dough maker and pizza assembler, while Kev keeps the title of log splitter, fire whisperer, and pizza spinner. 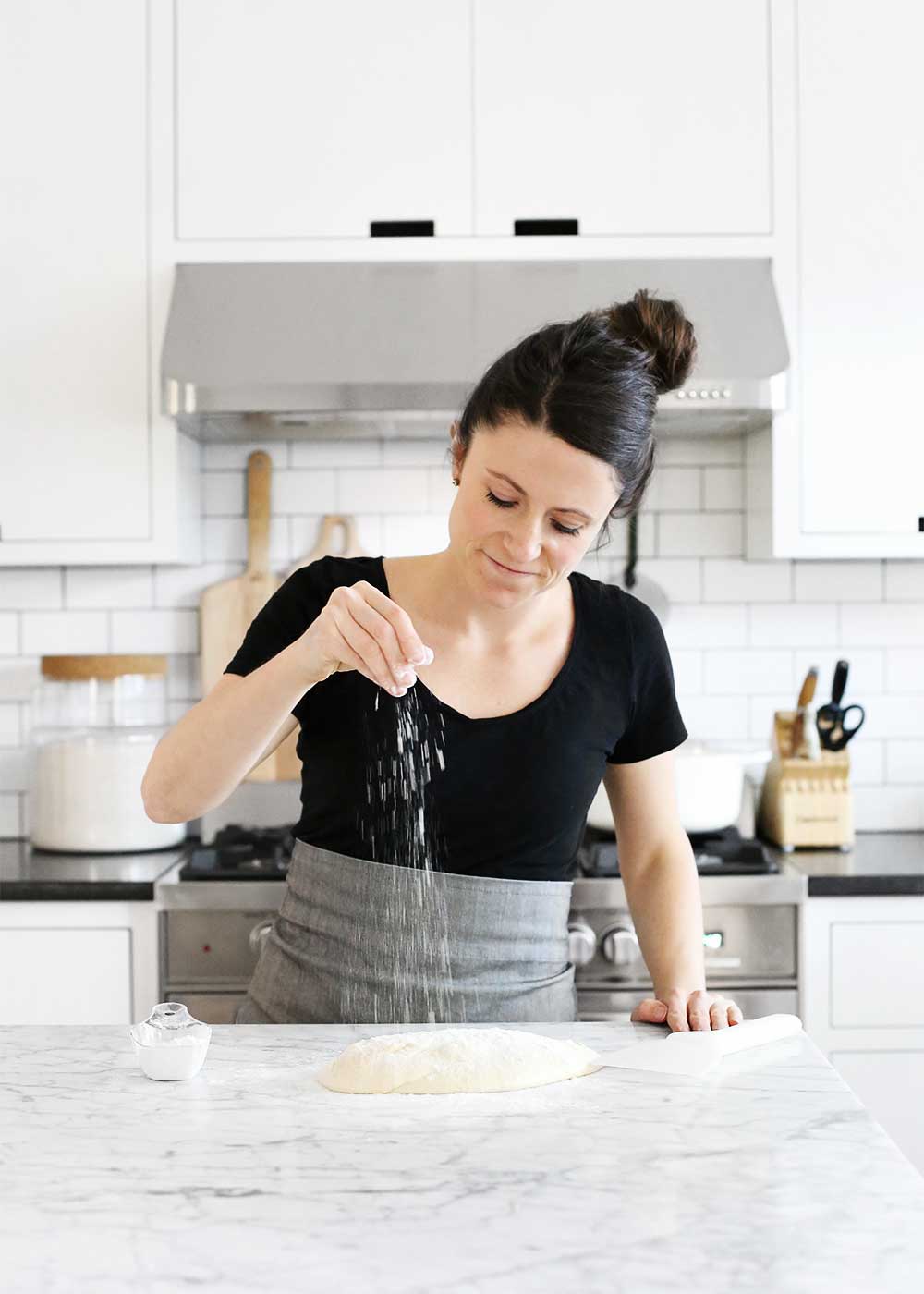 The final recipe has very similar bones to my old trusty recipe, but it’s far more hydrated, meaning it’s a really wet dough. That helps to yield that chewy handlebar of a crust. It’s a simple recipe with simple ingredients—flour, salt, sugar, yeast, water, and olive oil. But the real flavor maker is not in the ingredient list. The 72-hour ferment in the fridge that does all the delicious-making work. While you have to plan in advance for this wood fired pizza dough recipe, it’s well worth it. 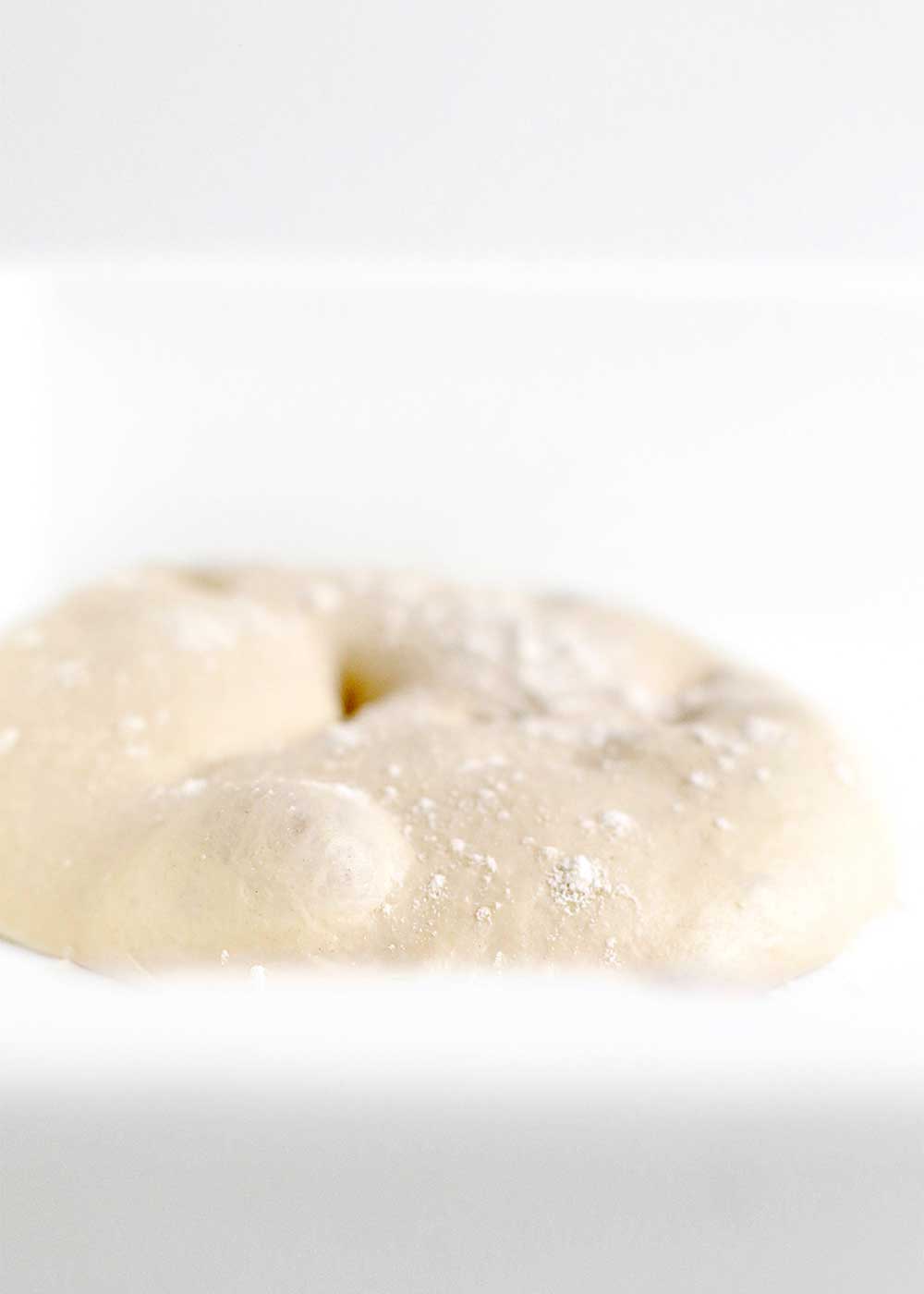 We made a major change to our pizza flour for this recipe. I’ve been using bread flour for years. But so many good pizza makers swear by 00 flour. After going back and forth between bread and 00 flour all summer, we too swear by this Italian flour. It yields the best kind of chewy. (Note: this flour has a short expiration date, so buy amounts accordingly. I love short expiration dates since they usually mean the food has no preservatives and should be eaten fresh.) 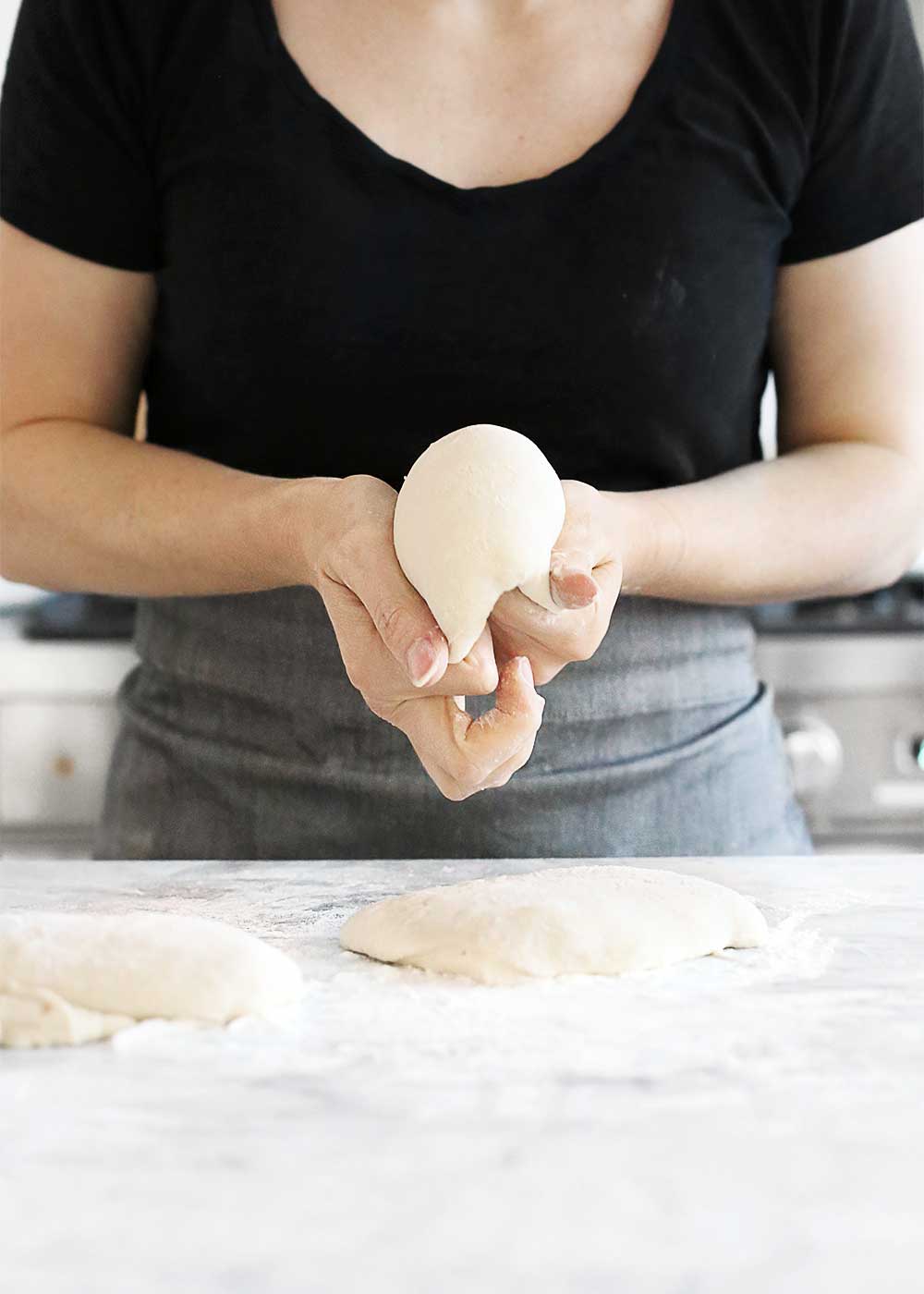 How to shape the dough

On day 3, a couple hours before pizza-making, the dough is shaped and placed in a proofing box to rise before assembly. If you’ve ever watched someone stretch mozzarella, shaping pizza dough is a similar motion. You continue pulling the top of the dough down and into itself until you form a tight, smooth dough ball, with the bottom seam pinched closed. 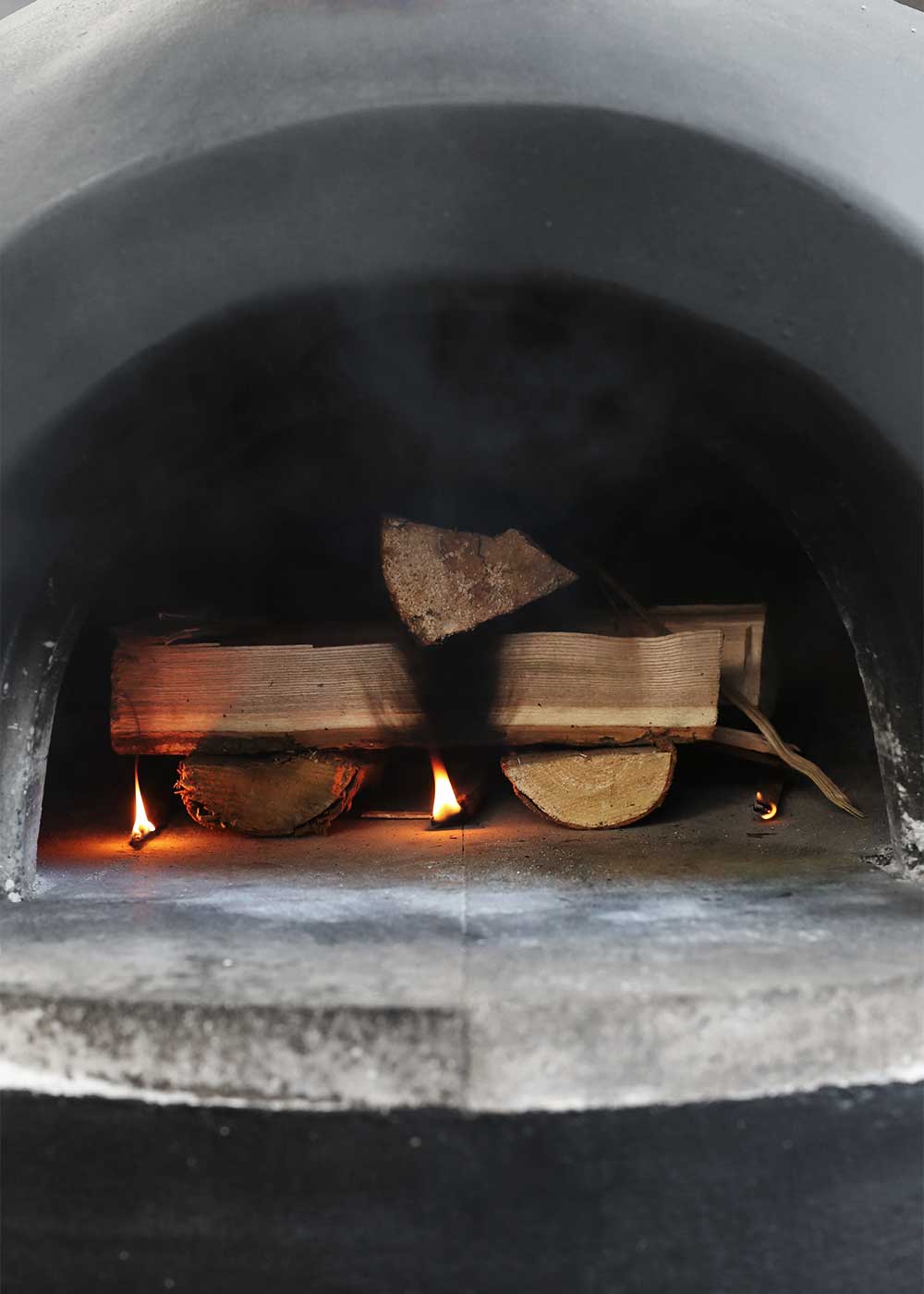 How to start a fire

About 45 minutes before cooking pizza, Kev starts the fire. There’s a thousand different ways to start a fire. Kev likes to use a mixture of fatwood fire starter and hard firewood. Here’s how he does it—on the base layer, alternate fatwood and firewood. Then stack two more alternating layers of firewood on top (see image above). Finally, light the fatwood, which will eventually catch the firewood. 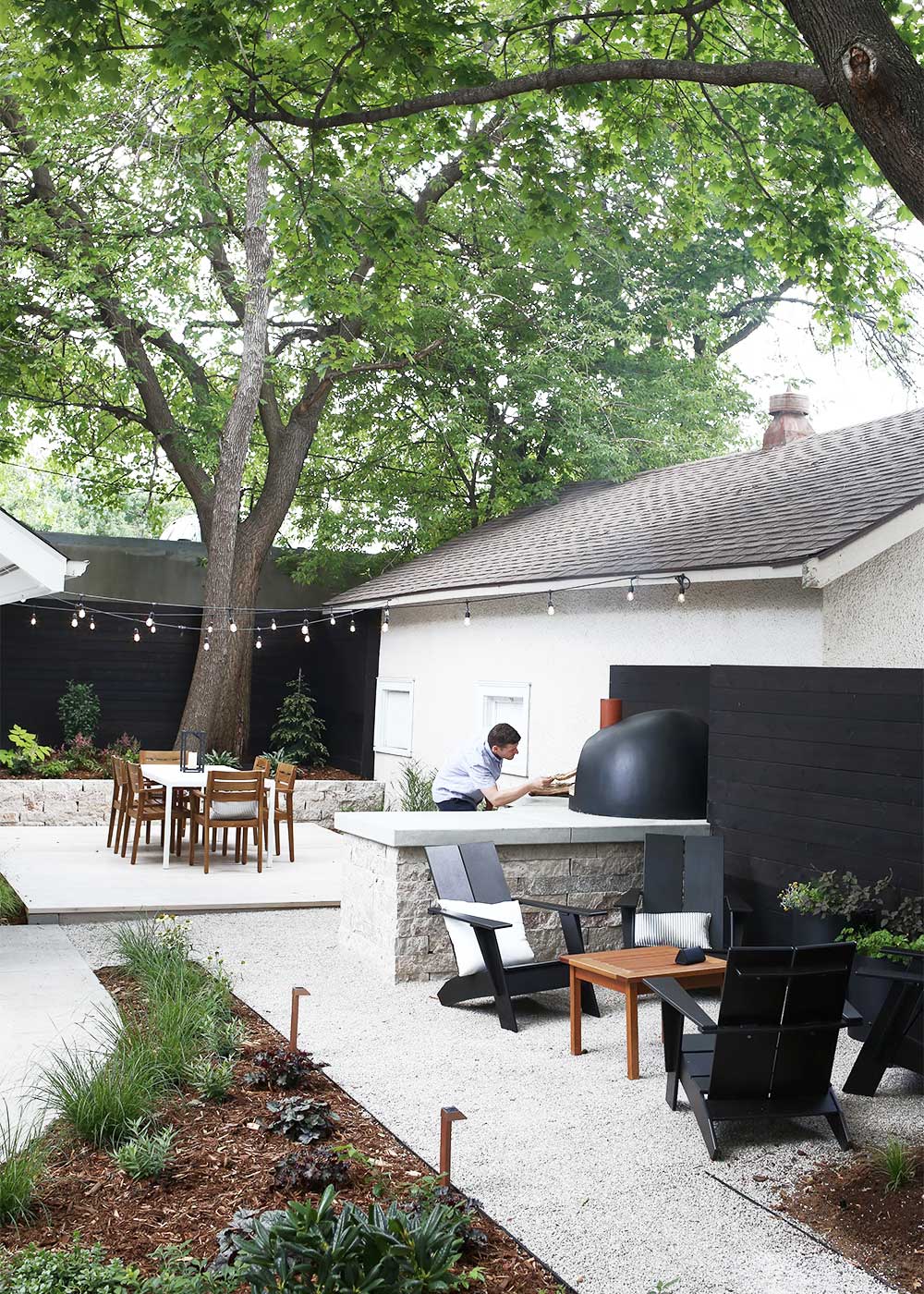 Heat the oven until the floor reaches about 700°F and the roof reaches about 1000°F. Feed the fire as needed. The logs will begin to look like flaming grey coals when ready. 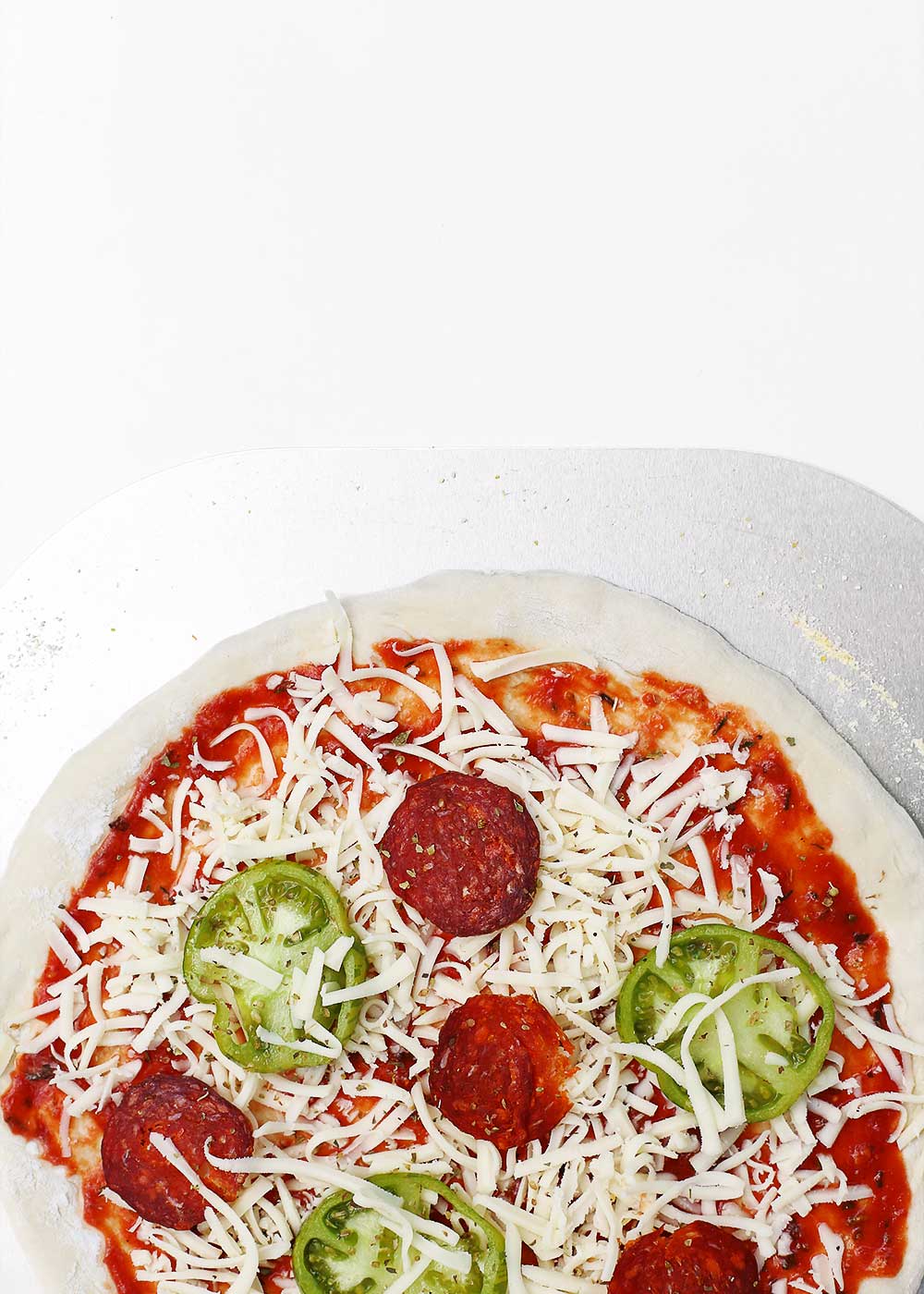 Once the oven is nearly ready and the wood has turned to coals, I start preparing the pizzas indoors. For easiest assembly, shred the cheese and prepare the sauce and toppings ahead of time. Pizza cooks quick in a wood fired oven, so assembly needs to be fairly quick as well. I assemble on smaller pizza peels for easy transportation outside.

Just before cooking the first pie, slide the coals off to the side of the oven. Cook 1-2 pies at a time, spinning with the round peel every so often for even cooking. For extra charring on the top, raise the pizza to the roof, where it’s hottest. Cooking times vary as the oven temperature fluctuates, but plan on 2-5 minutes at this high of heat.

Can you see that black dust below? Heaven. 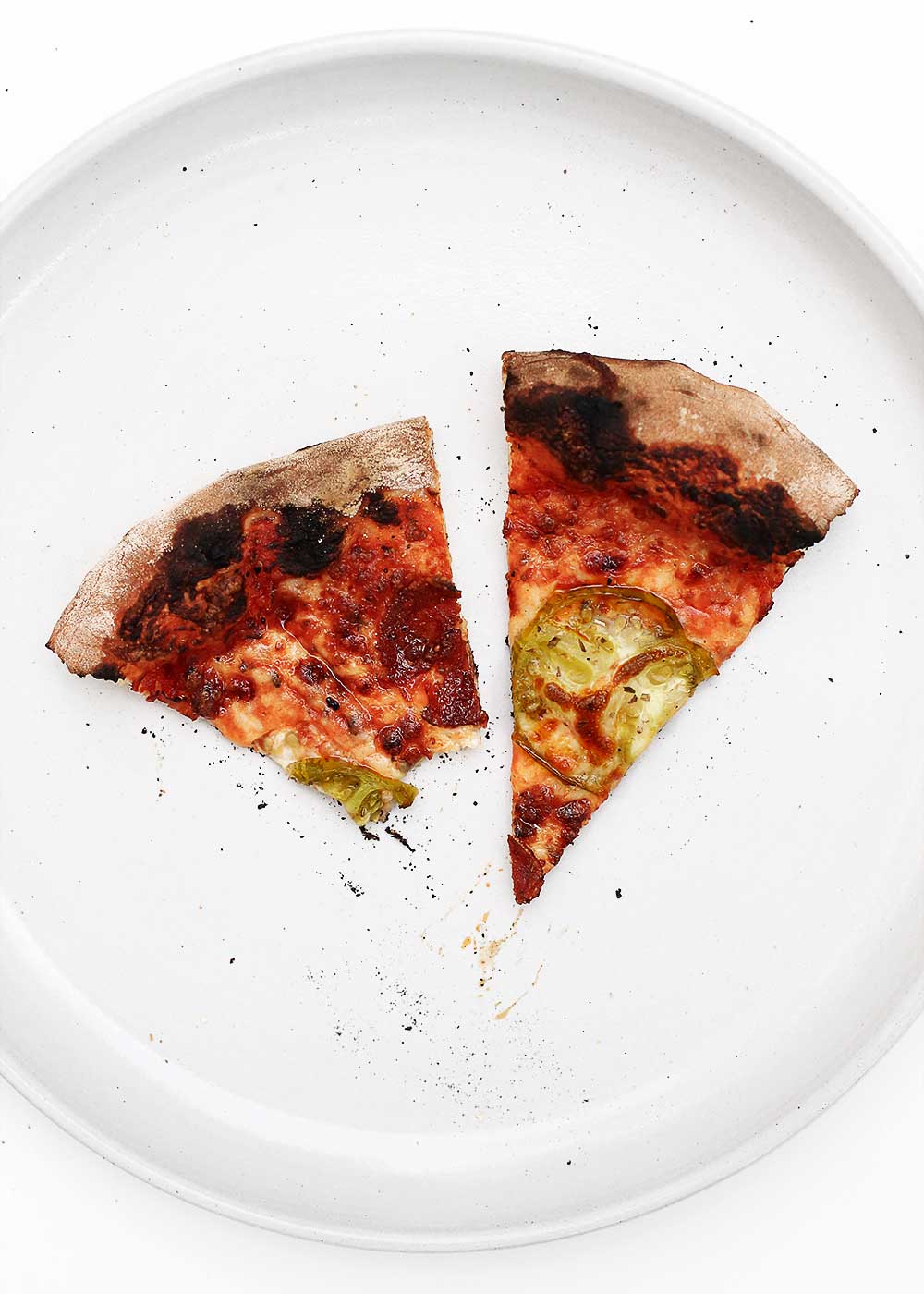 This is not a traditional Neapolitan-style pizza. If it has to be something, it’s closer to New Haven-style pizza in flavor and texture. The flavor development happens over the 72-hour ferment in the fridge, something so many pizza slingers swear by. We now do too. This recipe has been developed for an 800°F pizza oven. Cooking at lower temperatures will yield different results.

At least 72 hours (3 days) before making pizza, prepare the dough. In a stand mixer fitted with the paddle attachment, add all the dry ingredients. Mix on medium-low speed until evenly incorporated. With the speed set to low, slowly pour in the wet ingredients and mix until loosely incorporated. Dough will look lumpy. Switch to the dough hook and mix on low for 2 minutes. Dough should look fairly smooth by the end. Rest for 5 minutes. Mix for 1 minute more on low. Rest for 5 minutes.

At this point the flour should be well absorbed into the dough, however it will be on the wetter side. (If you touch it, it will leave some sticky remnants on your hand.) If not, you’ll want to mix in a tablespoon or so more of water. It’s important for this dough to be well hydrated. I find that I need to add a bit more water during the dryness of the winter.

Note: it’s difficult to add water into the dough after this point, but far easier to add flour later during the balling stage. This knowledge for the proper consistency will accumulate as you make the dough over and over again, and can vary by climate and season.

Place dough in a bowl with enough space to double in size or this 4 qt Dough Container + Lid. If using a bowl, cover with plastic wrap to keep the dough from drying out. Store in the fridge, untouched, for 72 hours.

On the day of pizza making, about 3-4 hours before cooking, turn the dough out onto a floured surface. Cut into 6 equal parts. Form into dough balls by pulling the dough down into itself until a smooth ball forms (see video). Use enough flour to keep the dough from sticking to your hands. Place in proofing box, cover, and allow to rise at room temperature. Timing will vary depending on the temperature of your kitchen, which can change from summer to winter.

The dough is ready when it easily stretches into a round pizza. Again, the more you make this, the more you’ll begin to understand timing and consistency and room temperature in your kitchen.

About 1-2 hours before cooking, start the fire. Prepare the sauce, cheese, and toppings.

Once the fire is ready (the floor is 700°F and the roof is 1000°F), assemble the pies. Liberally sprinkle flour on top of a dough ball. Using a spatula or pastry bench, carefully slide under the dough ball to remove from the tray. On a well floured surface, place the dough ball and coat with flour for easy handling. Liberally sprinkle a pizza peel with cornmeal and set nearby. Gently press your fingers into the dough ball to loosen the dough. Toss 1-2 times or gently shape dough by using a bit of gravity. Hang the dough, rotating quickly, for the final stretch. Leave about 3/4-inches of protected area for the crust. Make sure dough is adequately floured (no wet spots) before placing on the prepare pizza peel. Give the peel a little shake to make the dough will slide. If it sticks, carefully pull up sticky spots and add more cornmeal.

Add a light coat of sauce. Top with cheese(s) of choice. We’ve come to prefer grated mozzarella as opposed to fresh for the even distribution and saltiness, with a light dusting of pecorino. Add toppings as desired, being sure not to weigh the pie down too much.

With the coals moved to the side of the oven and the floor brushed clean, slide the pizza into the oven. Using a rounded pizza peel, spin the pizza in the circular motion every so often for even crust browning. I like my crust slightly charred. If you don’t, remove the pizza earlier. If the pie needs extra heat on the top, place the pie in the roof of the oven for a second. Serve immediately.

If serving pizza as a sit-down meal like we often do, make the pizzas slightly ahead of time and reheat just before serving by holding them to the top of the oven, using a peel. If trying this route, you’ll want to skip any charring on the first round and save this for the second heat.

I like to use SAF instant yeast as it requires no activation. It’s sold in large quantities but stores well for a year+ in the fridge. If using a yeast that requires activation first, proof the yeast in warm water (the same amount called for in the recipe).