All the Fall Things

Winter Squash: To Roast or To Steam?

From me, to you + Jiffy Cornbread

Veggie Pot Pies in a Mug

Making a House a Home: The Start 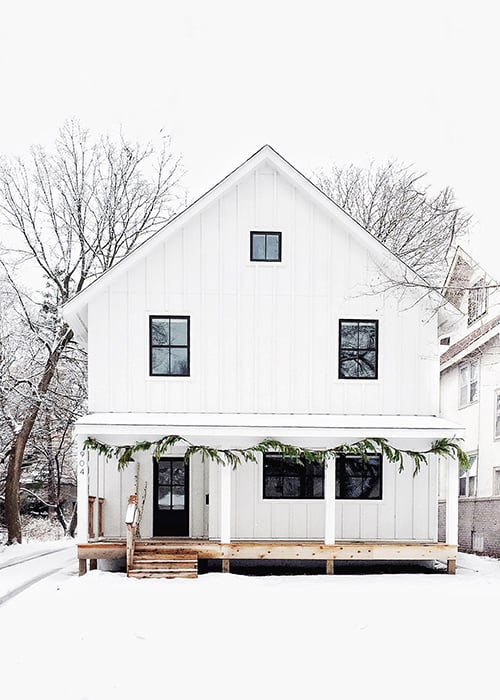 One month after moving into the house, we invited my brother-in-law up to shoot a video of it. I was certain 4 weeks would be plenty of time to get the house decorated. Completely decorated. He must have bit a hole through his tongue after arriving. The house was in no condition to be filmed, yet he said nothing of the sort.

We shot it when the trees were still green (unlike the current picture above). When it smelled so new. When those shorts still fit. When Hal took the stairs backwards. And I hadn’t yet lopped off my ponytail after reading a Pinterest DIY. We shot it when there were only 3 timid holes in the wall and one 3M hook. When the office walls were white and the mudroom un-wallpapered. We shot it when I was tossing pizza every Friday of summer.

Seven months removed, and I’m so happy we have this video. It works well as a before but I like to think of it more as a start. Making a house a home takes a really long time. You have to live in a space to know a space. And once you know it, you can design the space to work well with its function, making a couple mistakes along the way too. (Design tips below.) We’re still in the process of finishing rooms. But it feels like home and is starting to look like it too. I’ll be sharing a lot more about the house soon—the range, those cabinets, the schoolhouse green wall, the wallpapered mudroom, and the quirky grandma artwork. (And that pizza recipe too!) But consider this the start.

See more of #thefauxhouse on Instagram. Or read through the posts here.

Fauxtips for designing a space

• Live in a space for at least two months.
• Define the function of the space. How do you use it? What else do you need to make the space work for you?
• Create pinterest boards or mood boards. Do you see a common thread? That’s probably your style. We lean cozy, modern farmhouse with pops of color.
• Then begin determining the form, or the design, of the space. Layer in pieces slowly. You’ll make plenty of mistakes during this phase. Save all receipts.
• Edit the room as you would a word doc. Move things around. Sometimes the lamp was just in the wrong spot.
• Then let the space sit for awhile. It will either grow on you or rub you the wrong way. Edit again then move on.

34 Responses to "Making a House a Home: The Start"