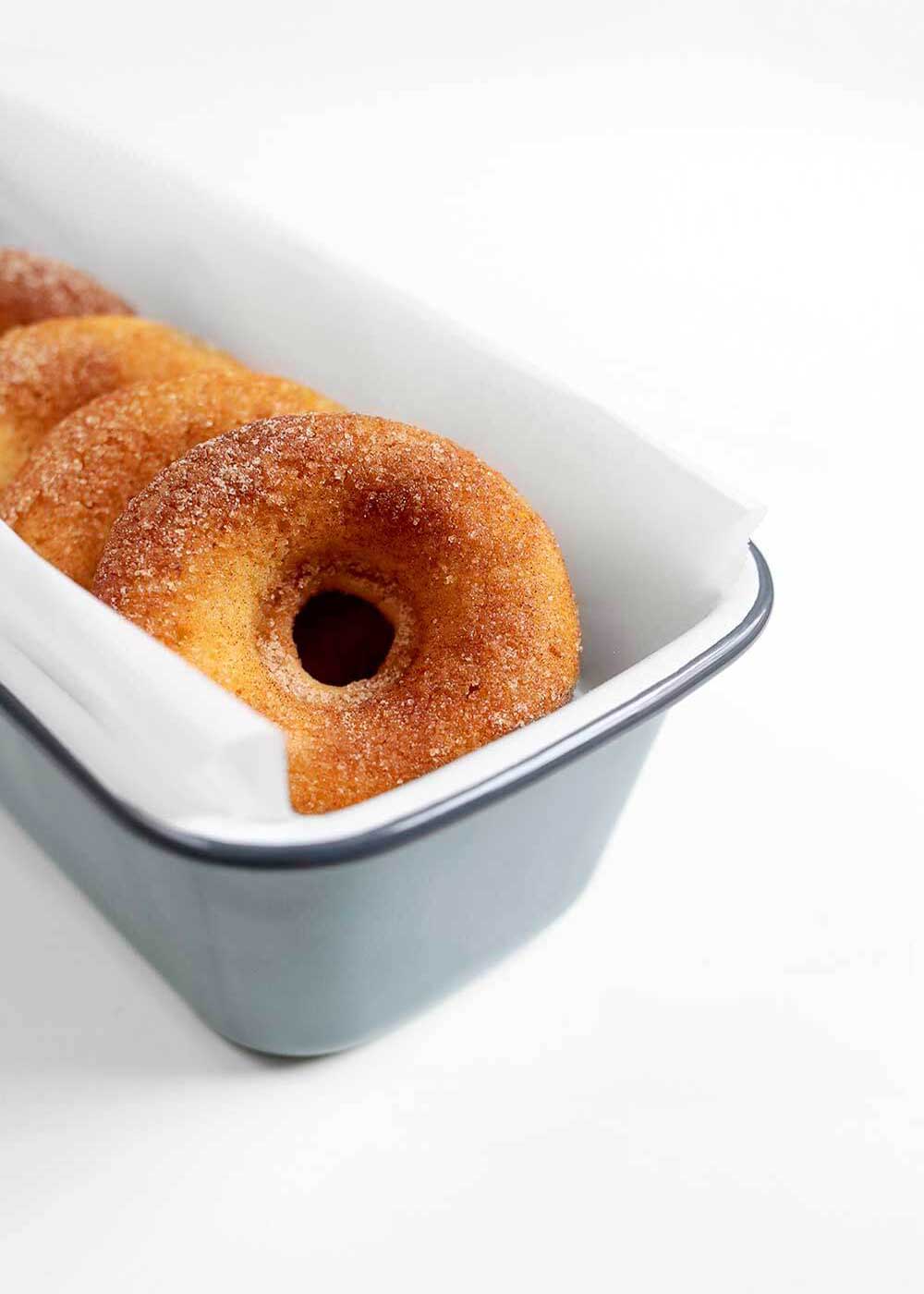 I like round food. Pizza, baked donuts, biscuits. I guess I should clarify, I like round food with flour. Wheat flour if possible. I’ve passed this trait on to Hal (along with my stubbornness). Couldn’t some of my better qualities seep through to her? The good news—meal times are rarely, if ever, a fight, as long as I get food on the table fast enough. In that case, she’s exactly like her dad. Food. Now. You can see how this is a problem for someone who likes to make everything from scratch, especially Baked Apple Cider Donuts. 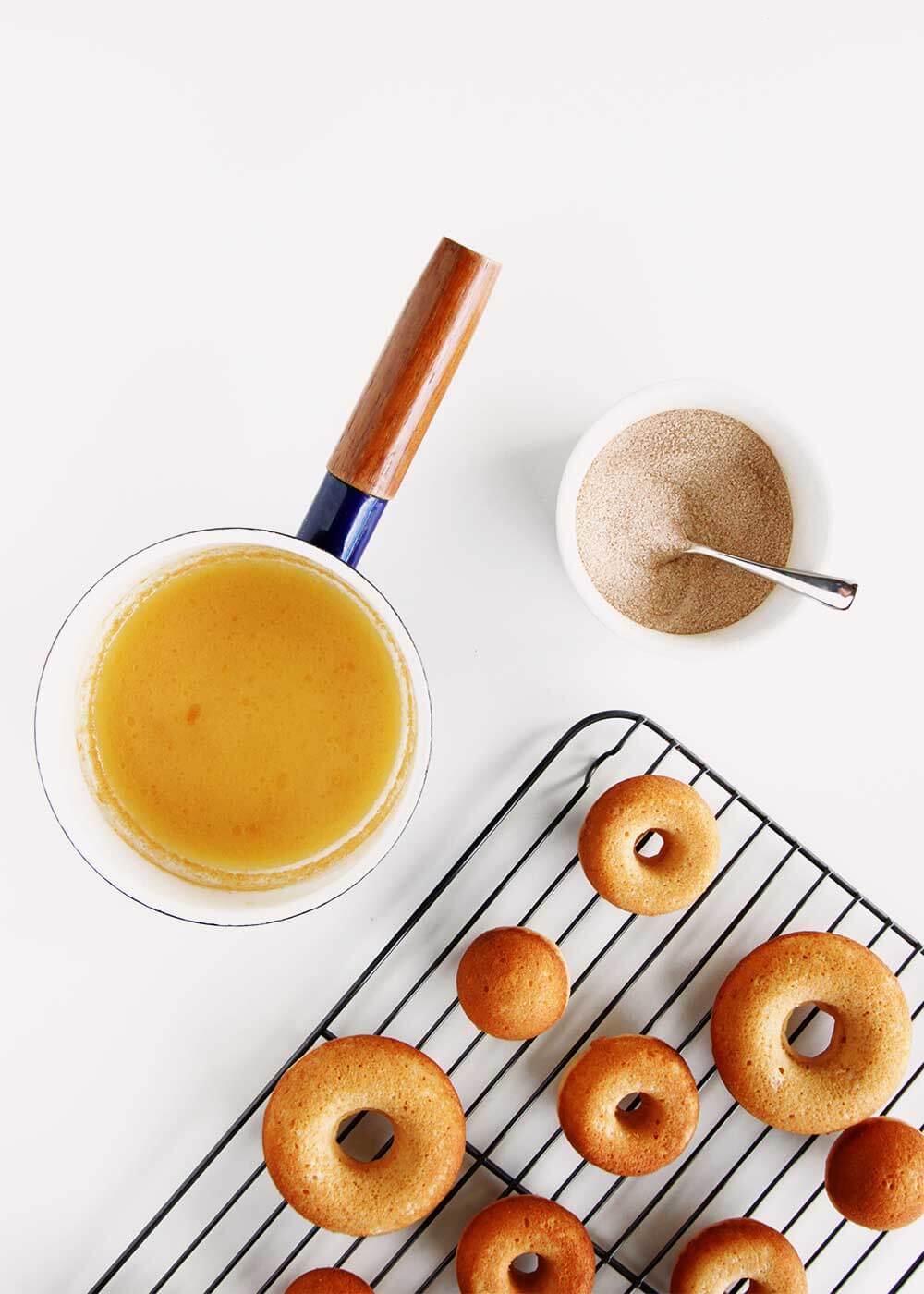 Which brings me to these Baked Apple Cider Donuts. As I was working on this recipe, recipe after recipe said to reduce your apple cider. Reduce?! There’s no time to reduce for a breakfast recipe these days. I’ve got a maximum of 25 minutes before someone croaks or fills a bowl with cereal. I had to figure out a way to keep it apple-y without adding steps and time. I think this is what Darwin must have meant by survival of the fastest. 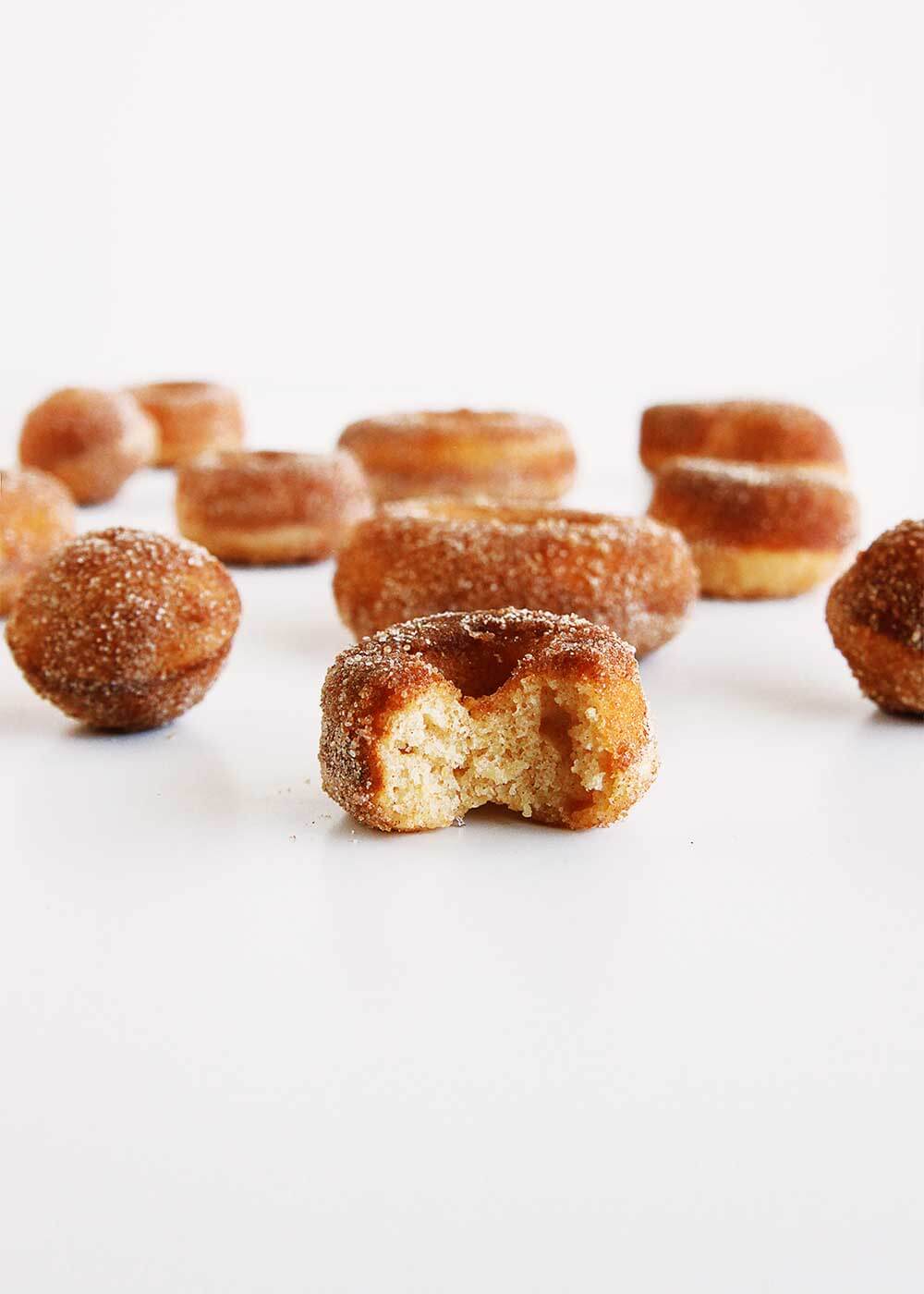 Here’s what I did: I dropped the milk from my base recipe to sneak in more cider without compromising the flavor and structure of the donut. Then I added apple cider to the butter bath the donuts take just before getting their cinnamon-sugar coat. This is scientific stuff, my friends. 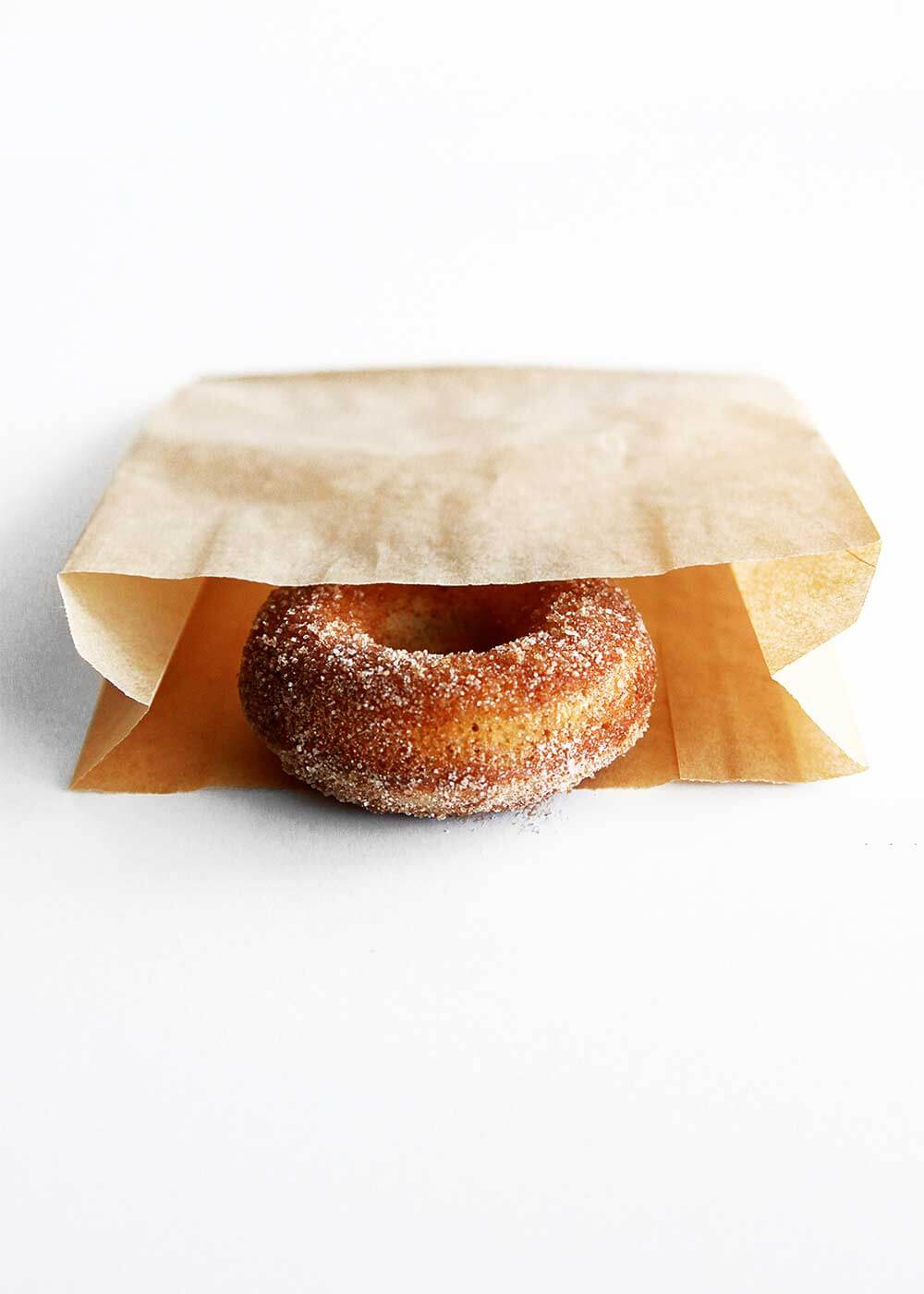 Speaking of science—my sister was a biology major in college. (She’ll be a Physicians Assistant in a few short months.) Anyway, during one of my visits, she took me to biology lab. Afterward, while still in the lab and within earshot of many, I thanked her for taking me to “Science Class.” She looked at me the same way I look at Kev and Hal when they want food now. Needless to say, I was a design major. I took enough “science classes” to graduate. Let’s not apply Darwin’s theory here, please. 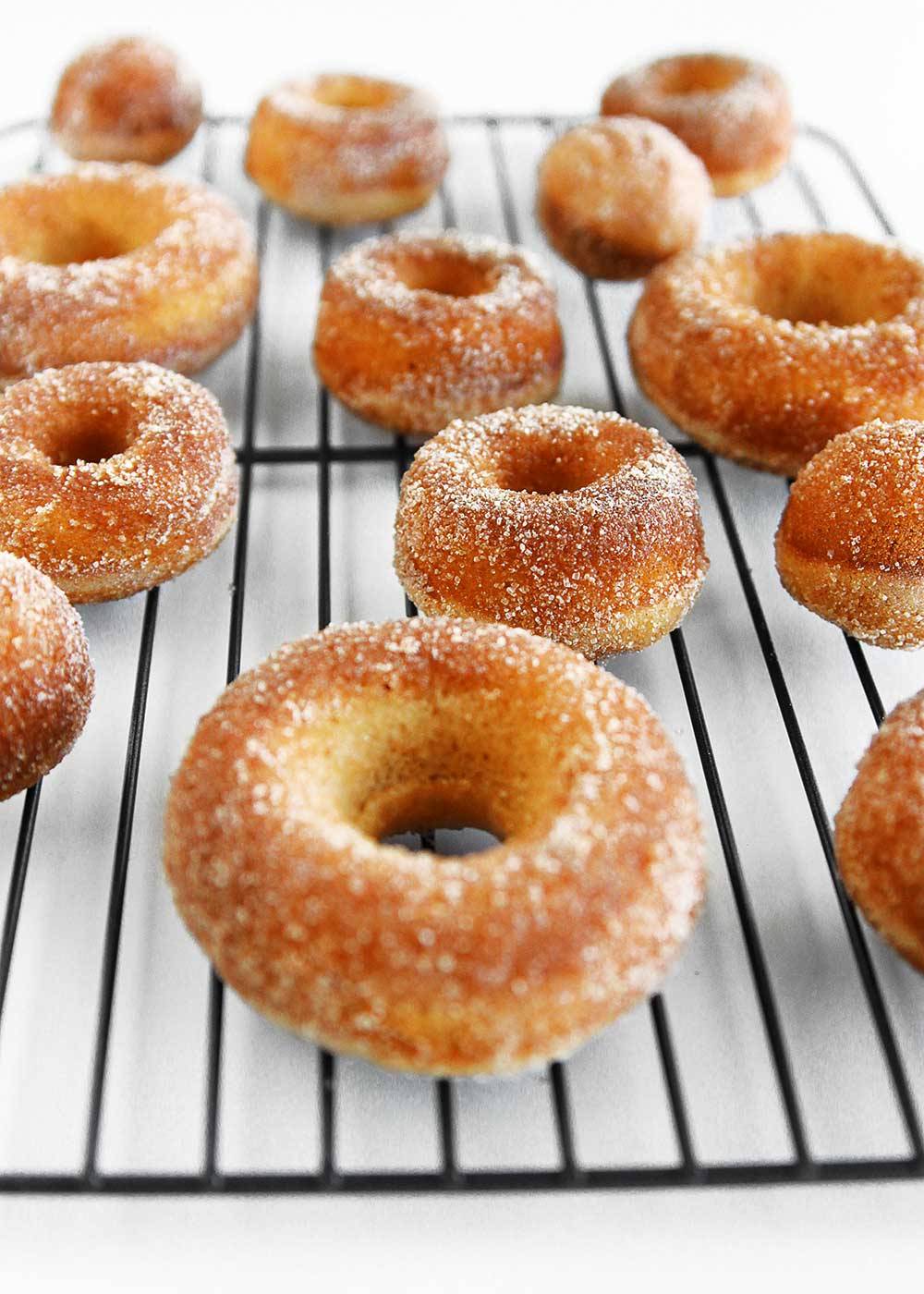 Back to those Baked Apple Cider Donuts—they’re light yet dense in structure, as a cake donut should be. The apple is pronounced without overpowering the cinnamon-sugar coating—the trademark of an apple cider donut (which was solidified after hearing your thoughts here). I skipped going down the reduced apple cider glaze route for fear of getting growled at for an extra-long recipe. I’m glad I did. These couldn’t have turned out better thanks to the advice of Apt. 2B Baking Co. and Edible Perspective. I owe you guys! Peace, love, and fast baked apple cider donuts.

You could also call these Apple Cider Donuts sans guilt. They’re baked and hidden with wheat flour, though no one will know. They come together quickly in the morning and are best when served warm.

*If you don’t have superfine sugar (I don’t stock it), add sugar to a food processor and quickly pulse until fine, not powdery. If you pulse too long, it will turn into powdered sugar. Good to know when you’re in a pinch!

Making the night before? Serve warm the day of. Set oven to broil. Place a cooling rack on a baking sheet. Place donuts on top and bake for about 1-2 minutes.

Pssst: make sure you have a regular, mini, and donut hole pan.