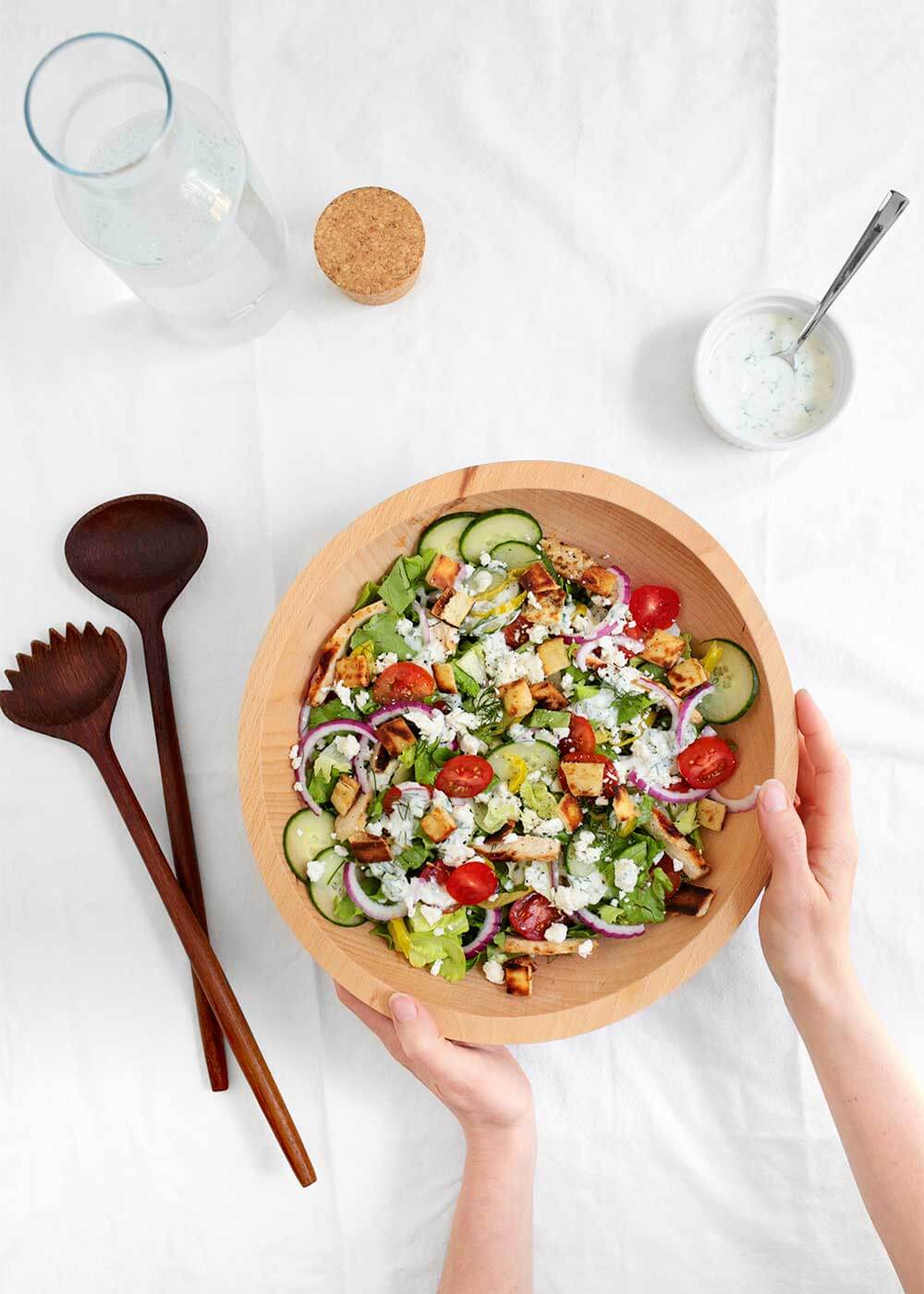 Twice a year, on cue, I clumsily transition from winter to summer cooking and back again, as if I’ve never cooked through it all before. Fall and spring are such short blips, I count them out in the bulk of my mental meal planning, though I consume as many red ripe strawberries as a spring can produce. It’s June, and the amnesia of summer cooking is slowly wearing off. It’s that season where the majority of the meal can be eaten raw and served out of a single bowl to be passed around the table family style, like communion, like a bag of unnaturally yellow movie theater popcorn, like a tall bottle of opened red wine. It’s a holy time unless I forget to set the chicken aside from the Family Style Chicken Gyro Salad. Hallie, my tiny vegetarian, protests loudly. Maybe that, too, is holy. We say amen, cheers, and eat together outside on a 65°F evening. 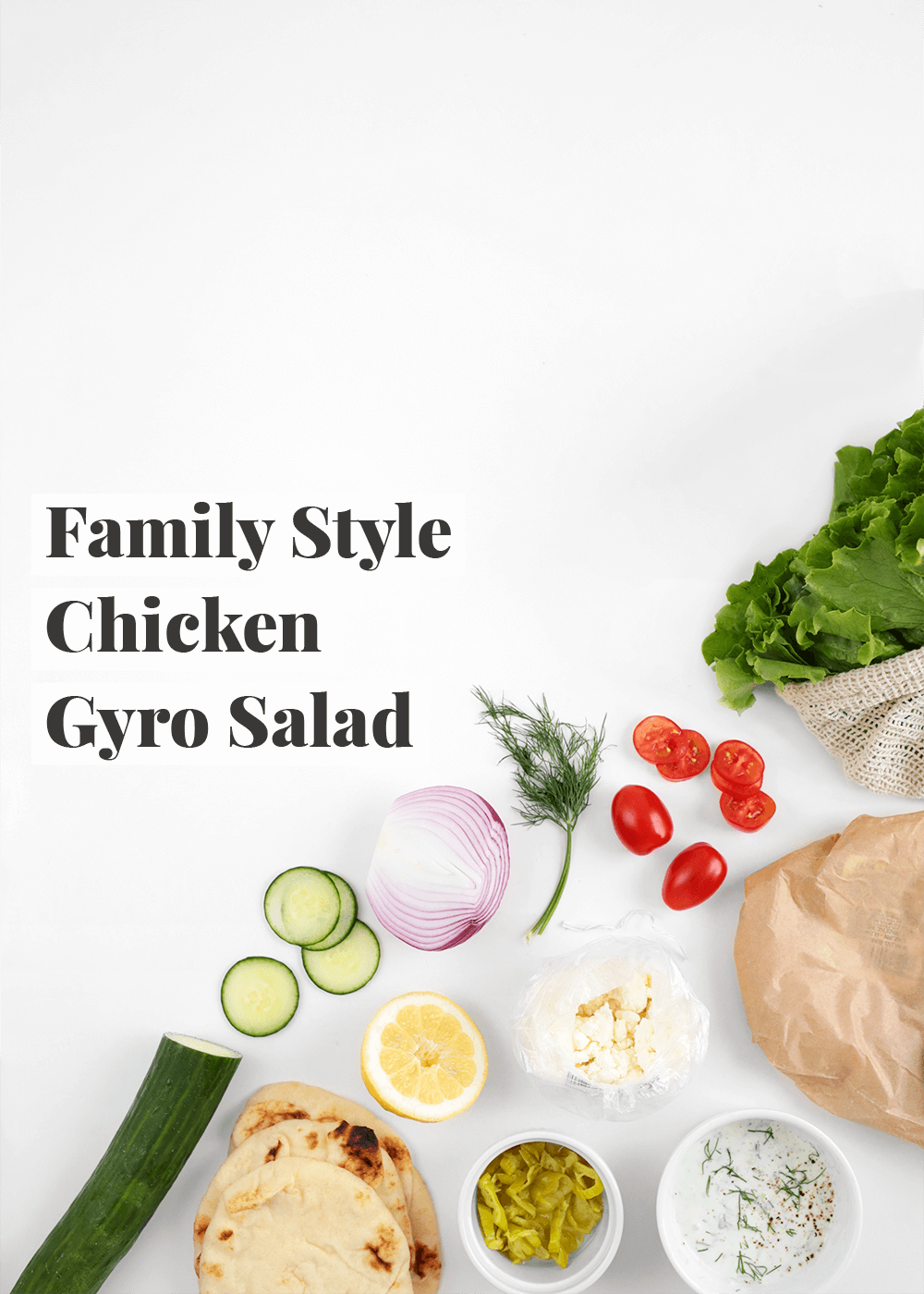 This post was created in partnership with Sub-Zero, Wolf, and Cove, who support our same belief to live colorfully, generously, and deliciously. 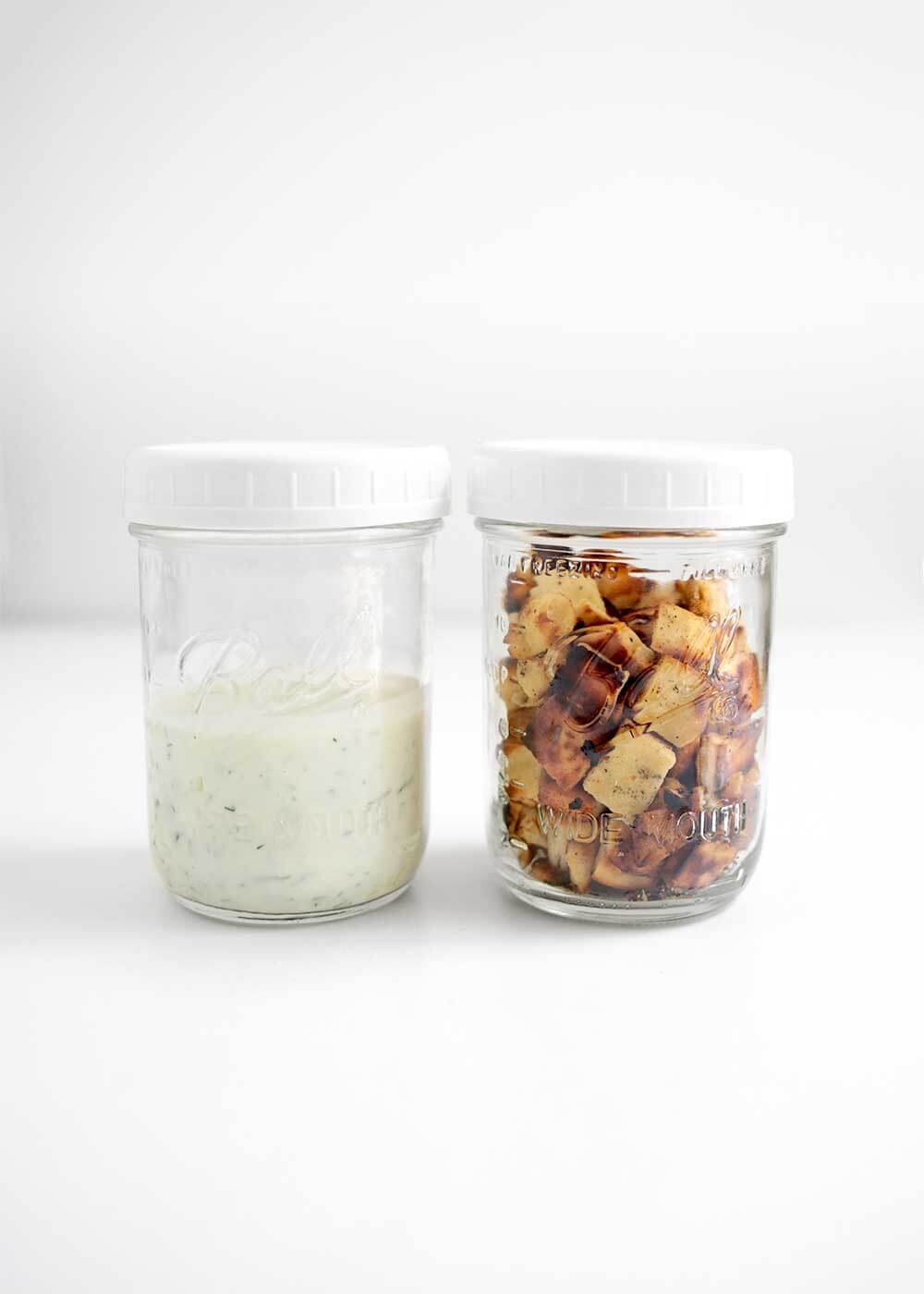 I say amen to the tangy yogurt tzatziki dressing, too, that can be made in advance to ease the mental load of dinner prep. I say amen to the chicken that marinates all day long in the fridge (that could just as easily be swapped out with roasted chickpeas). I say an extra amen to the fluffy naan turned croutons. To the brilliant colors of summer offspring, the zippy pepperoncini peppers, and the juicy red tomatoes. 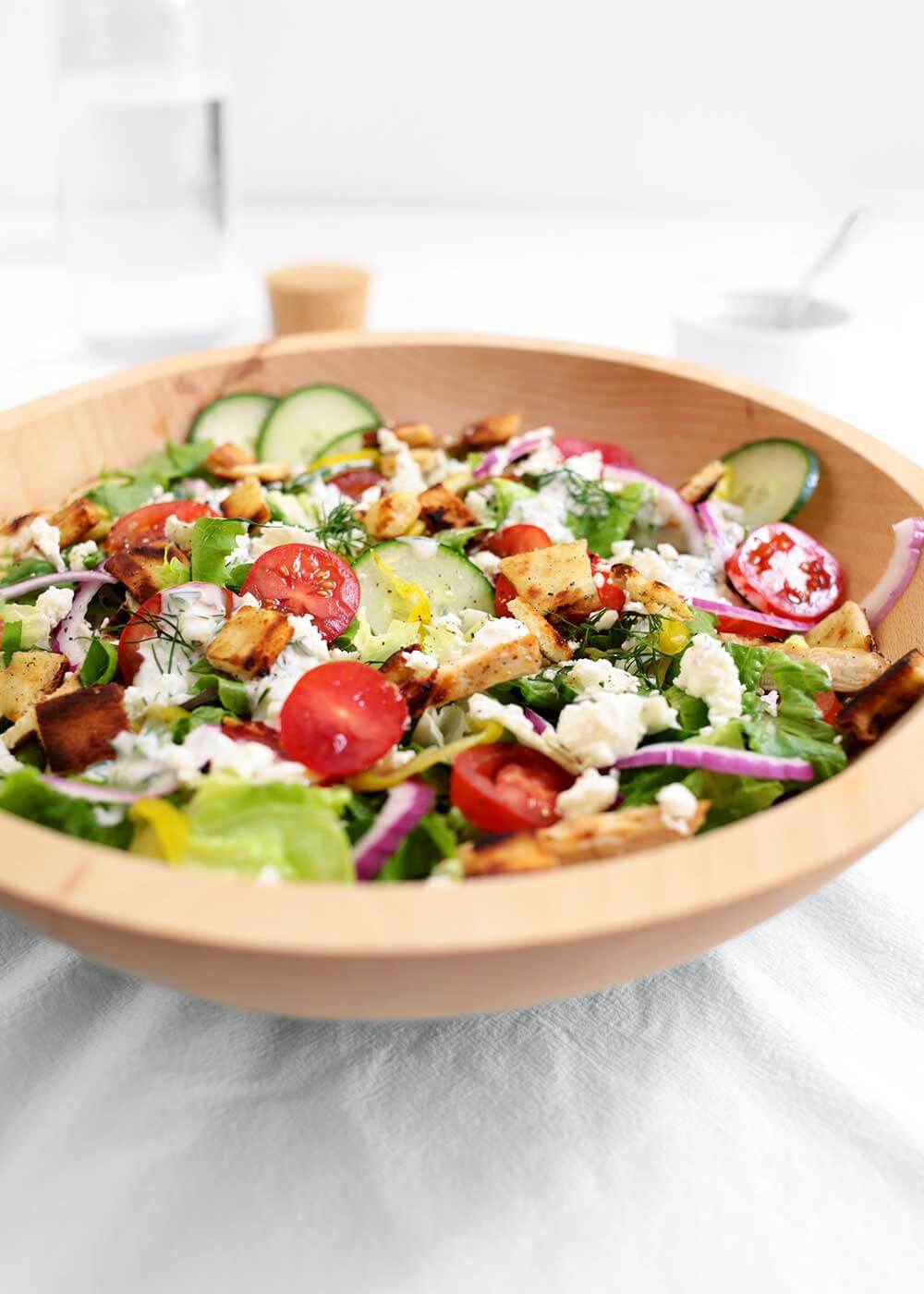 But mostly I say amen to dinner served out of a single bowl, that leaves behind a minimal clean-up. That keeps me at the table, and Kev too, so we never miss a sentence from Hal’s high and low of the day. It’s a dependable, open-ended question that we learned from our neighbor to get Hal talking, one that’s so trusty it’s turned into a nightly ritual. It’s a question that she now asks us. I say amen, too, to the favorite handheld chicken gyro sandwich turned salad, a slight ratio adjustment to get more greens in and diminish the spillage down the side of our hands.

As I dig through the garden and watch green shoots spring out of the ground and tomatoes swell into a deep shade of red, as I thinly slice the jewel-toned red onion, my eyes water, from the onion and allergies of course, because, despite all odds and a 6-month deep freeze, life persists. It persists at the dinner table, where the amnesia wears off, where the meat sits in a separate bowl for Hal’s sake, where we share our highs and our lows, and settle into the delicious season of summer. Kev, can you pass the Family Style Chicken Gyro Salad?

Like my friends at Sub-Zero, Wolf, and Cove say—live colorfully, generously, and deliciously. And out of a single bowl if you can help it. (Or two if you need to keep something separate.) 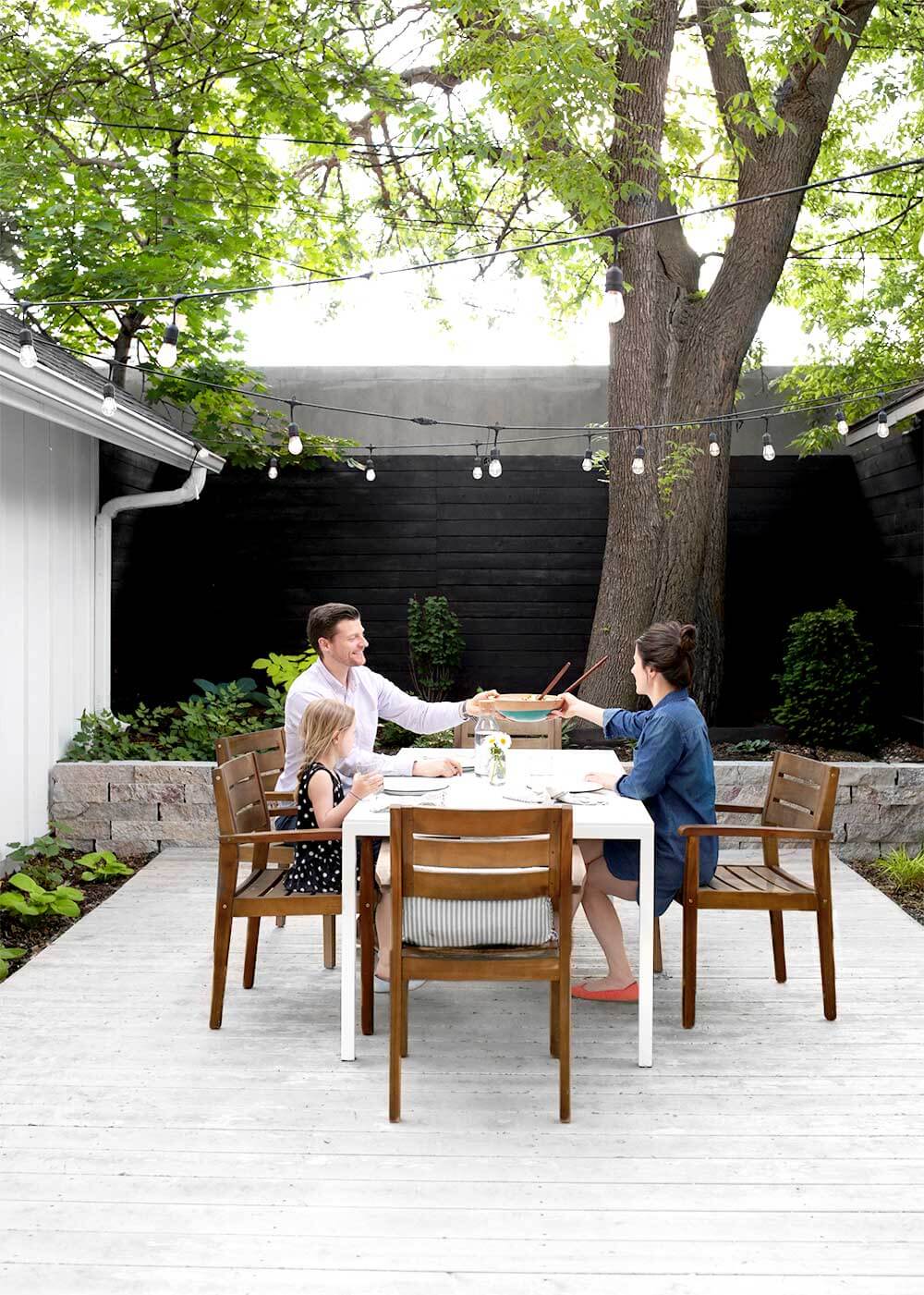 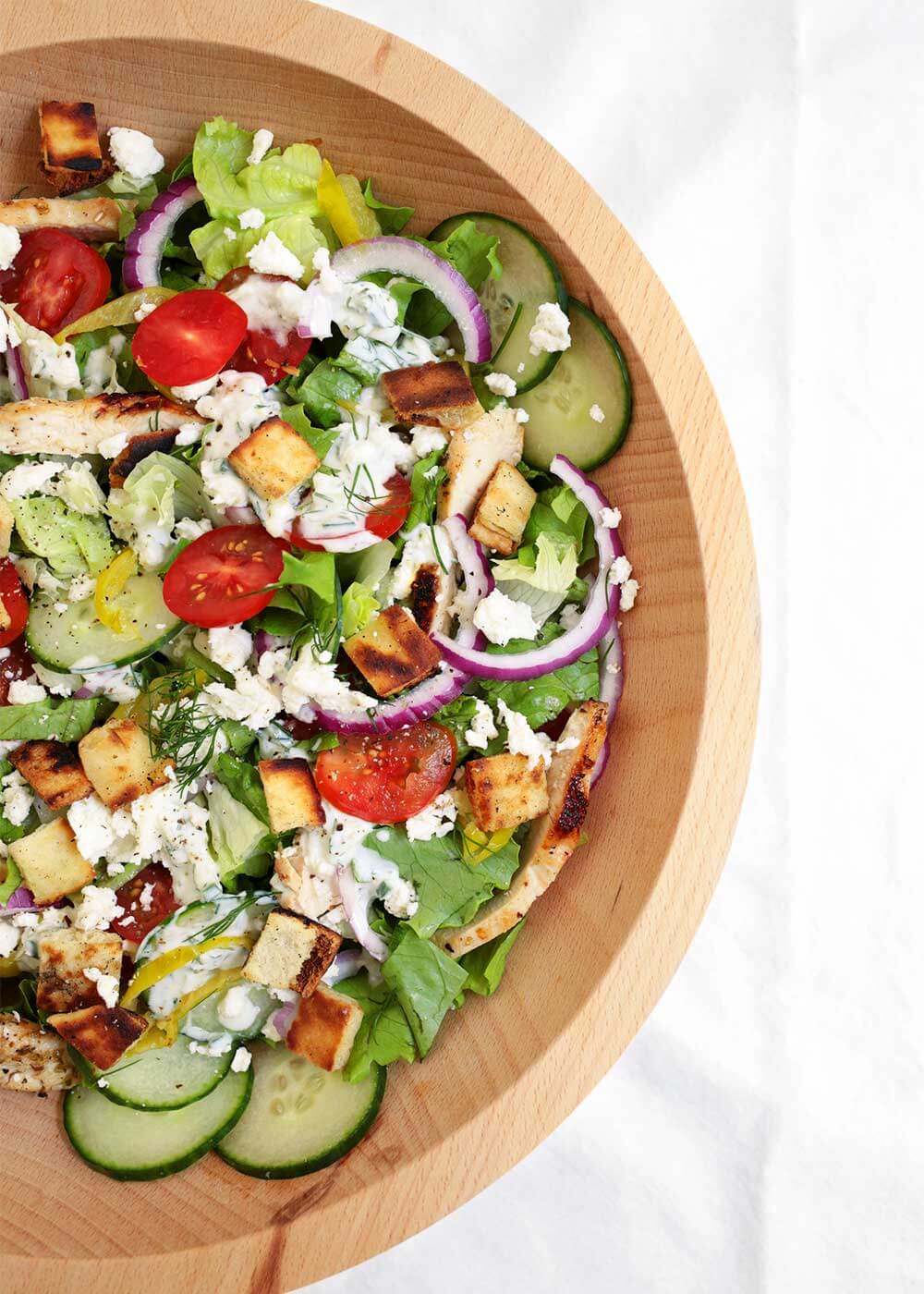 It’s your favorite Chicken Gryo in a salad. Though the ingredient list looks long, on a closer look, you’ll see most of these in the pantry. You’ll also notice, half of this recipe can be prepped in advance to make the overall prep more doable.

Marinate the chicken in advance. Place chicken in a folded over piece of parchment paper and pound out to about ¾-inch thick (or pound out in packaging if able). Add chicken and remaining marinating ingredients to a lidded container. Cover and place in the refrigerator to marinate for 1 to 8 hours.

Make the tzatziki dressing. In a small bowl, stir together all dressing ingredients. Thin with additional water as desired. Cover and store in the fridge. This can be made up to 1 day in advance.

Make the naan croutons.  Cut naan into ¾-inch squares. Add to a cast iron skillet with the oil, and toast until golden over medium heating, tossing occasionally. These can be made up to 3 days in advance and stored covered at room temperature once cooled.

Assemble the salad. Remove chicken from fridge about 15 minutes before cooking to bring to room temperature. Meanwhile, prep the vegetables. Set aside. Preheat a cast iron skillet over medium heat for 5 minutes. Spray with neutral oil and place chicken on the skillet. Cook for about 4 minutes on each side or until a meat thermometer reads 165°F. Remove chicken from skillet and allow to rest on a cutting board. Cut chicken into slices. Toss all salad ingredients into a salad bowl. Top with croutons, chicken, and dressing (as desired). Serve immediately.