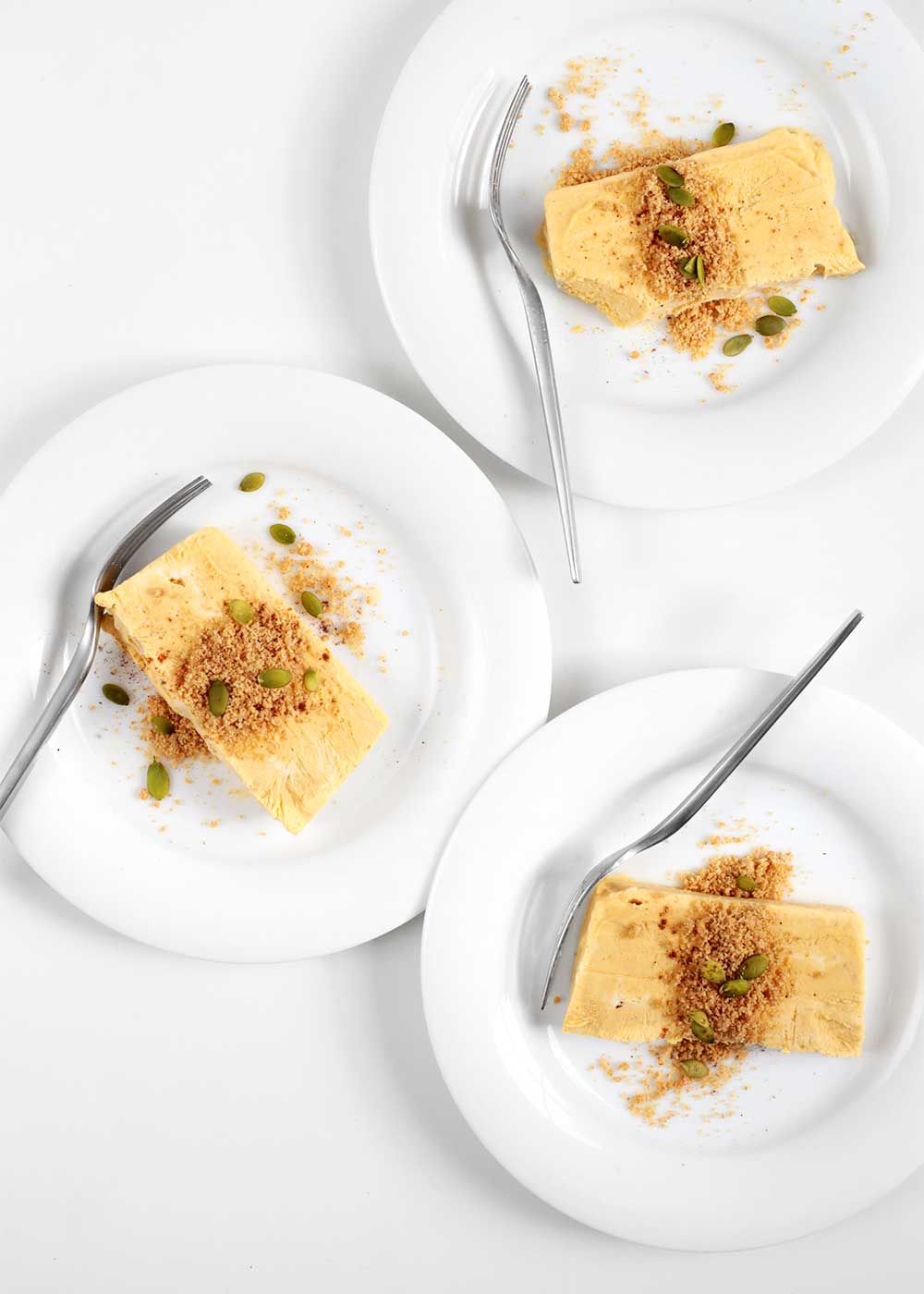 This is not news. The oven has a strict Thanksgiving schedule, especially if you only have one oven like we do. Between the turkey and the green bean casserole, the rolls and the sweet potato casserole, and the stuffing that’s not really stuffing (I prefer to bake it outside the bird), the oven is full. One thing comes out and another goes in. I like to imagine myself as a synchronized swimmer, long arms pointed and outstretched, a flat back, grabbing the uncooked dish on top of the stove with one hand and removing the heavy golden casserole with the other. Without looking, of course. I just hope I have the oven mitt on the right hand. 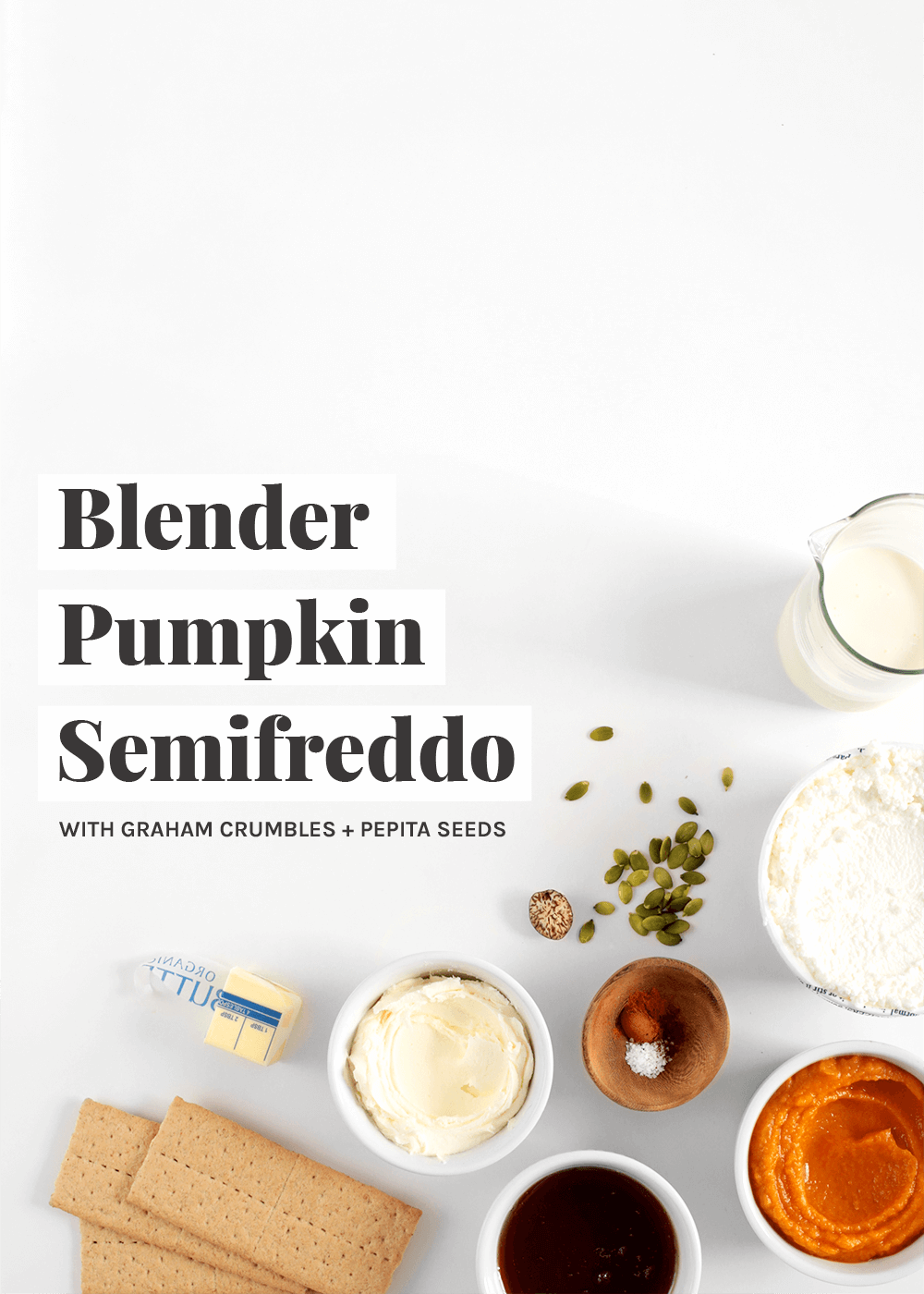 This post is a four part series sponsored by Vitamix and The FeedFeed. I’ve been using a Vitamix my entire adult life and have been known to travel with my Vitamix by car. I use my Vitamix as a blender, food processor, and sometimes a mixer. Thank you for supporting a brand that makes my kitchen run more smoothly. 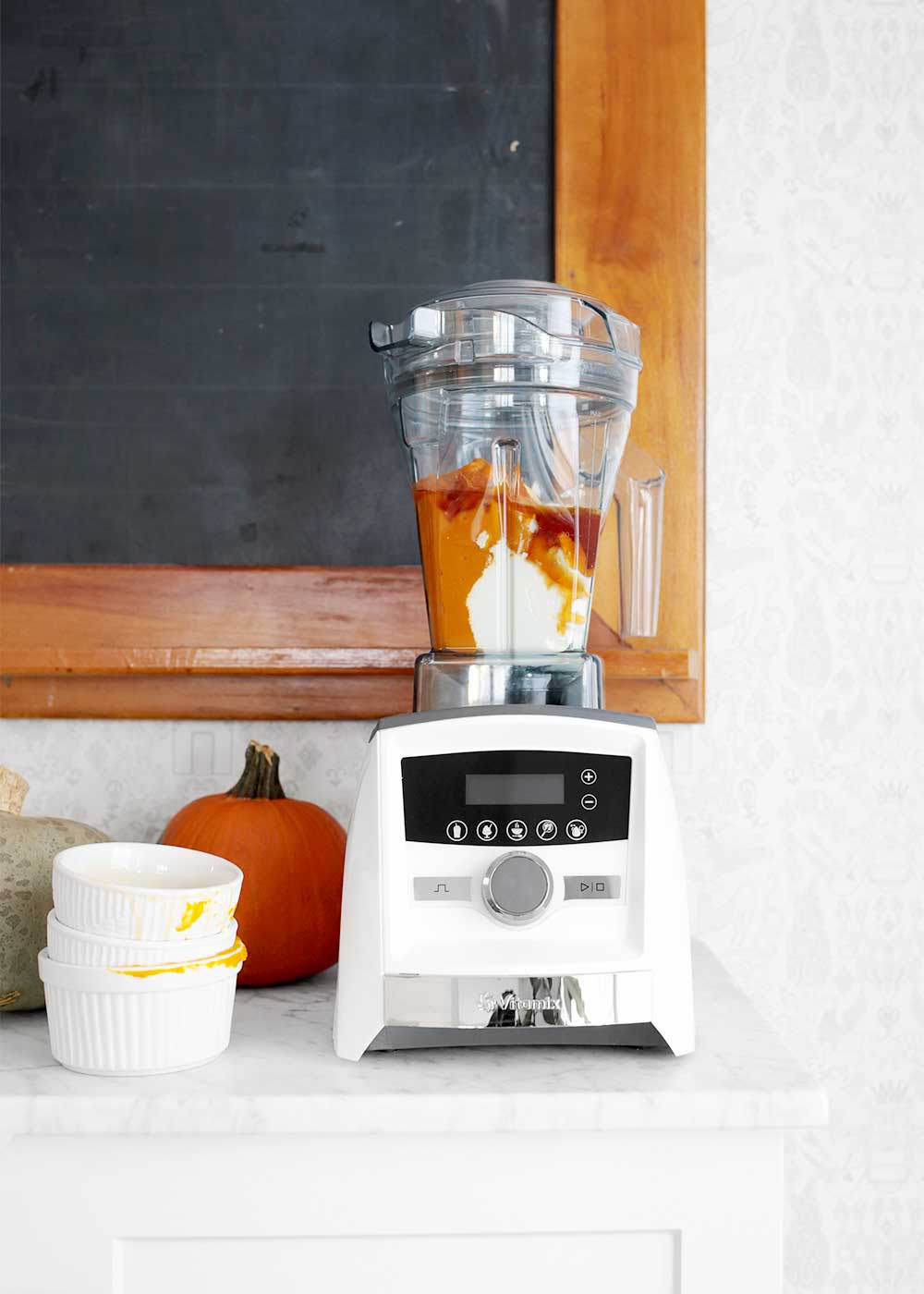 But the pie. The pumpkin pie! How will I fit it into the schedule? A day dream realized. Because I’m neither graceful nor organized when it comes to scheduling. My arms—they’re short. And the mitts—of course I’ll have them as mixed up as I’ve had my right from my left my entire life. 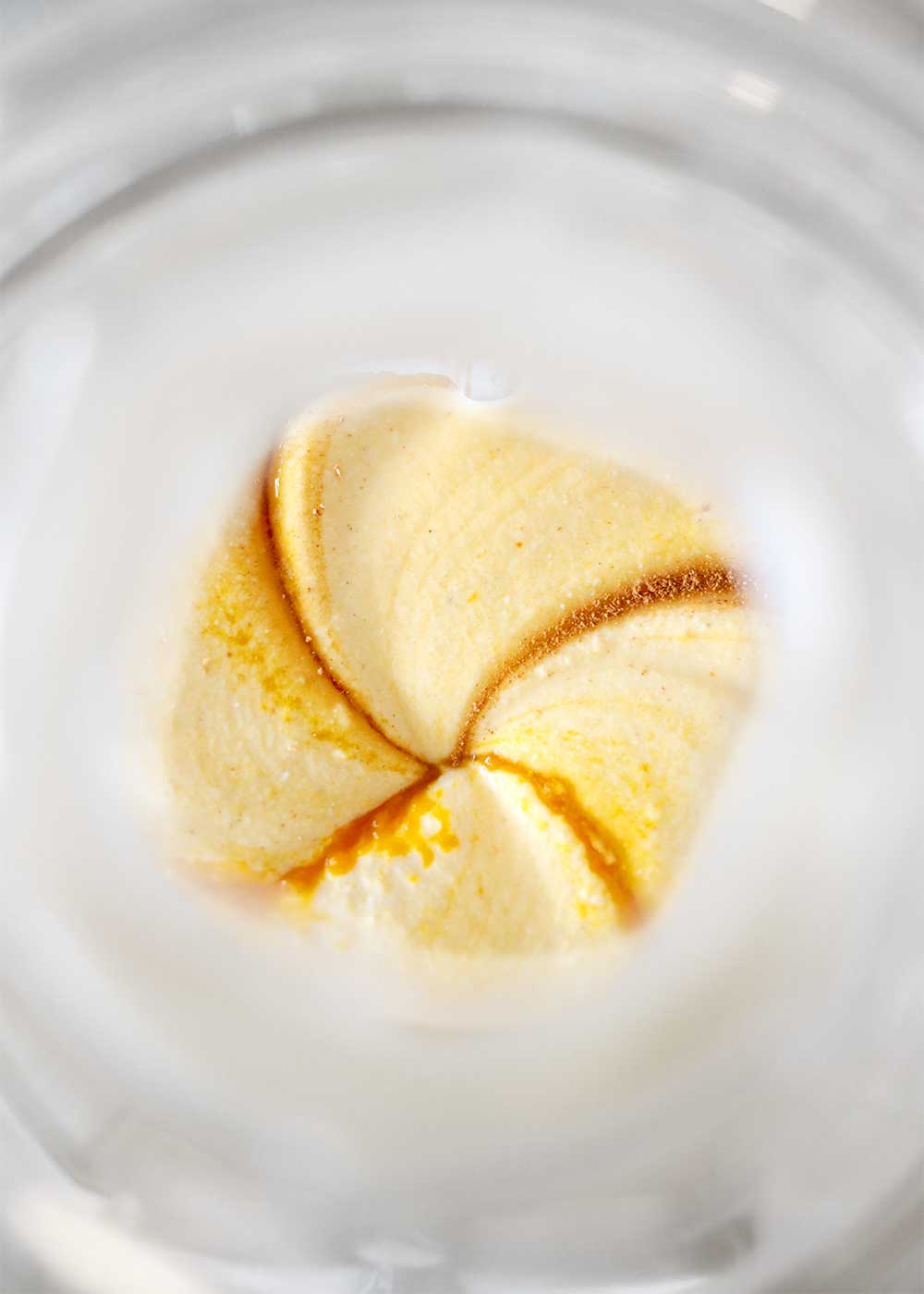 Which is why I’ve worked on a Blender Pumpkin Semifreddo recipe for the big day. It can be made a couple weeks in advance, in the space of 5 minutes and a blender. Yes, a blender. It tastes like a slice of creamy pumpkin mousse or cheesecake. A cool ending to a warm meal. 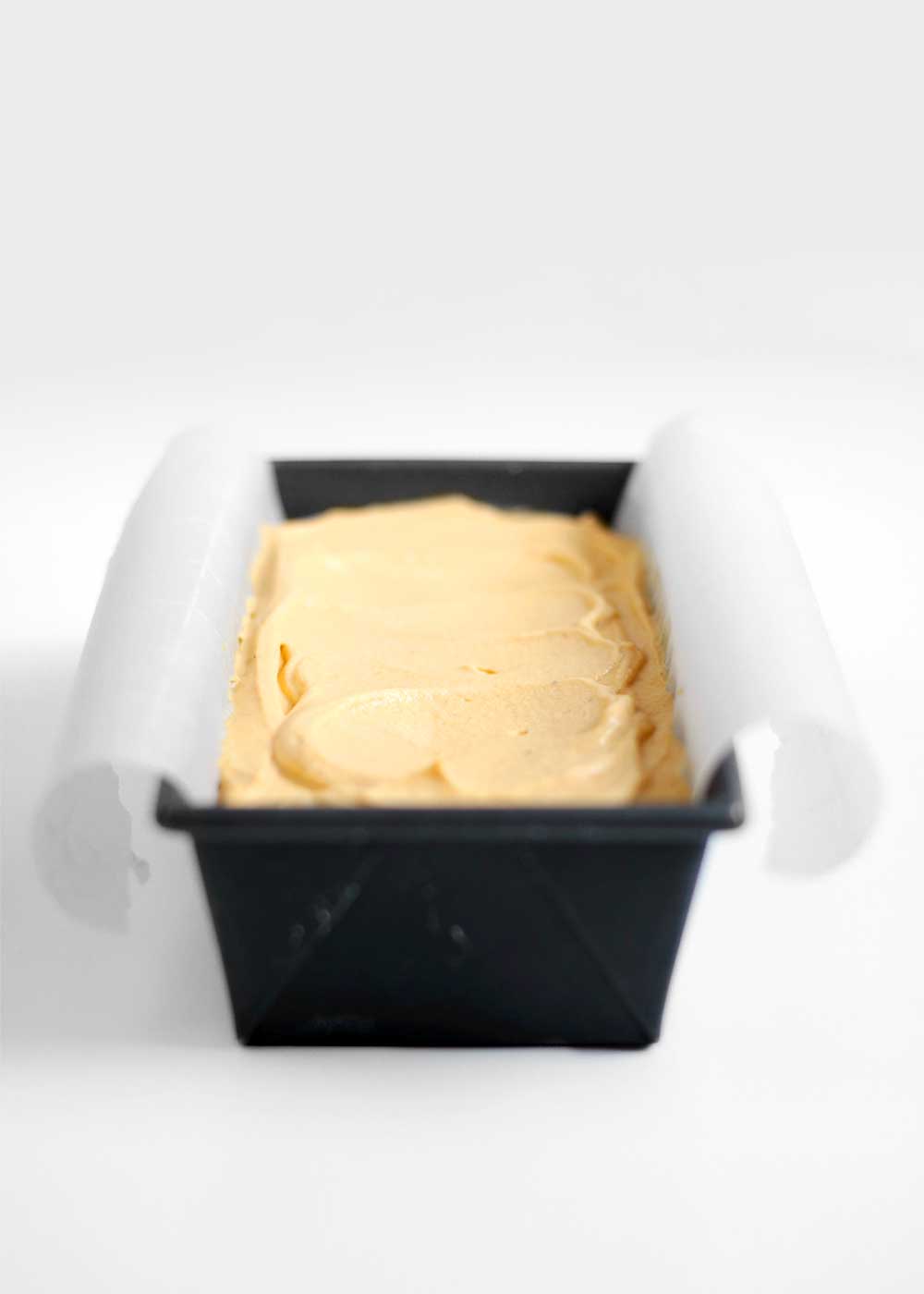 But what is a semifreddo? It’s as it sounds, a semi frozen dessert, typically a custard base thickened by cooked yolks. I’ve cut corners using the same simple, no-cook base from the Honeyed Ricotta Semifreddo in my book, The Minimalist Kitchen, swapping in pumpkin, maple syrup, and the usual pumpkin pie spices. 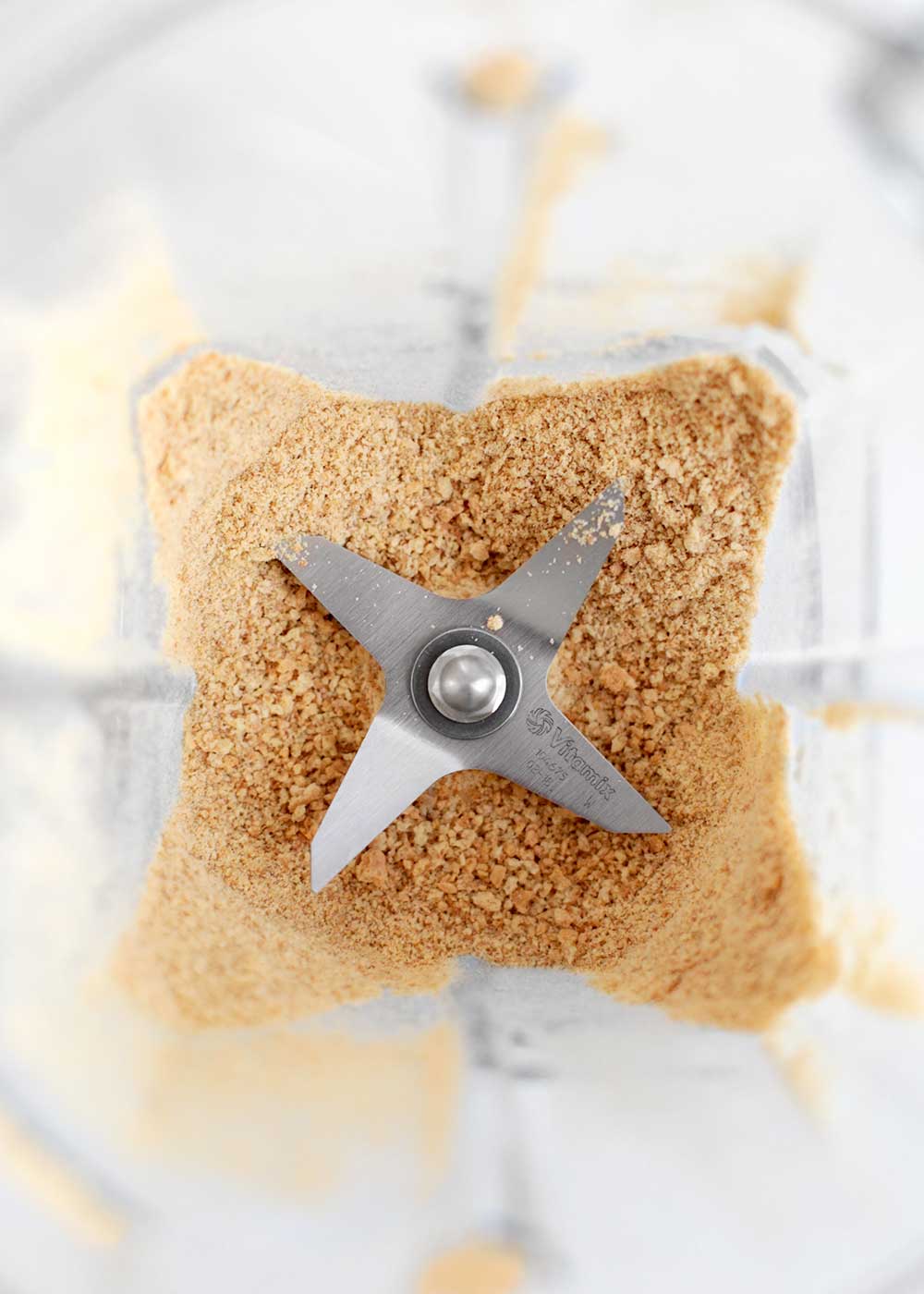 The crunchy graham cracker crumble also comes together in the blender. Some people swear by their instant pots. I swear by my Vitamix Blender, the tool I used to make every component of this recipe, from the creamy pumpkin Italian cheese base to the whipped cream to the graham cracker crumble topping. With a little warm water and soap, the basin cleans itself too. Basically, you can practice your synchronized Thanksgiving oven routine while this make-ahead dessert makes itself. But you only have 5 minutes. Hurry!

Side note: If you asked me—Melissa, if you could only pick one, what small kitchen appliance would you recommend? I’d tell you to save up for this, a Vitamix. Skip the immersion blender and the food processor (I don’t own either), and invest in this machine. We use ours daily. They have several types of high powered blenders. We have the Ascent Series in white, pictured above. It’s smart in that the machine adjusts speeds based on the basin. It also has the ability to pulse and make an entire dessert. 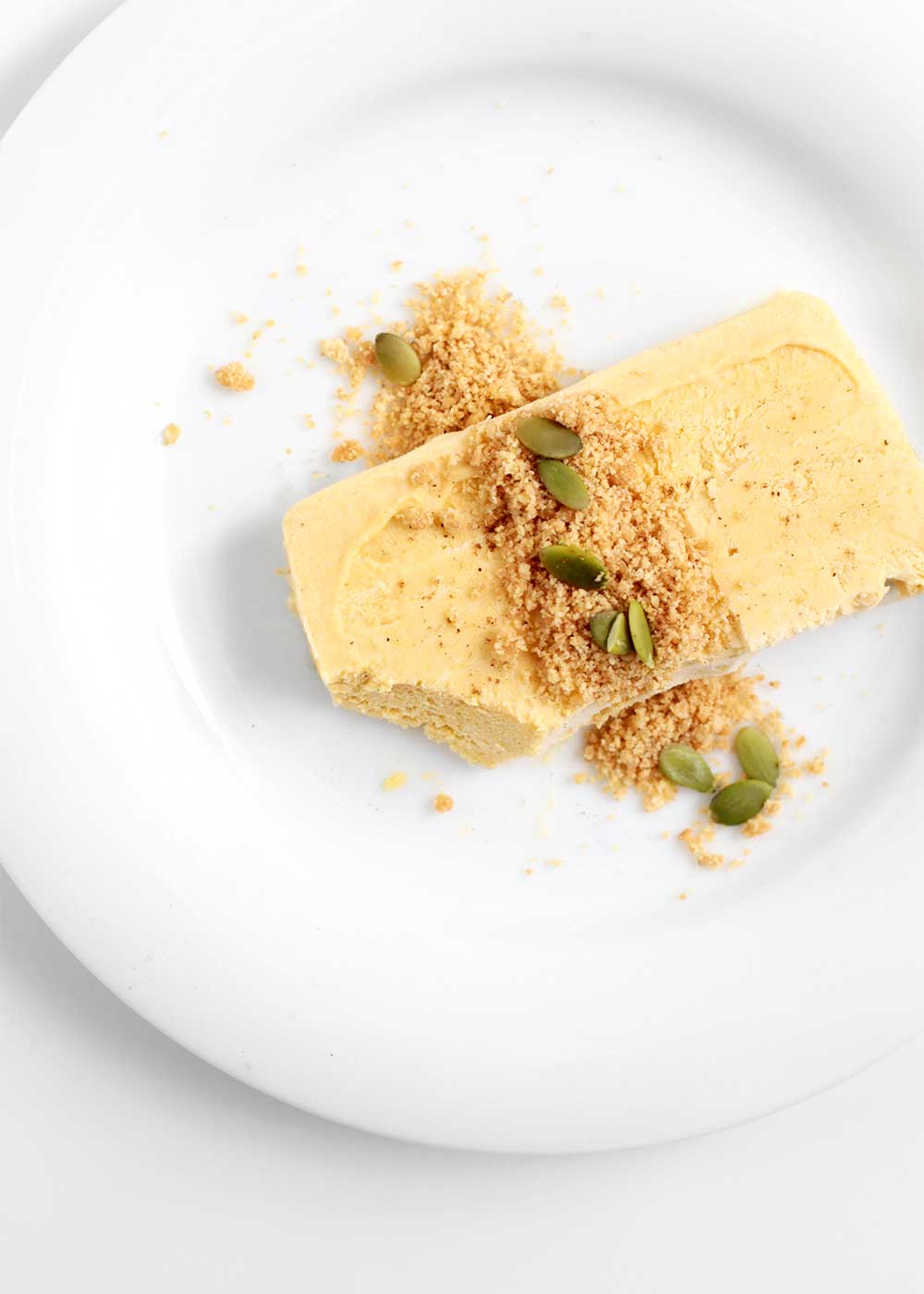 A simple, make-ahead dessert. It’s a cross between frozen pumpkin mousse and cheesecake. A cool ending to a warm meal. Each component of this recipe can be made in the space of 5 minutes and a Vitamix Blender.

Make the semifreddo at least 4 hours before serving and up to 2 weeks. Line the width of a 9 x 5-inch loaf pan with parchment paper. Set aside.

In a high-powered blender, add the cream, and slowly turn up the speed to medium until stiff peaks form. (Alternatively, using a stand mixer with the whisk attachment, beat the heavy cream on high until stiff peaks form.) Remove cream and place in a mixing bowl. Meanwhile, place all the remaining semifreddo ingredients in the blender basin (don’t worry about cleaning it), and process just until incorporated, no longer.

Pour the pumpkin mixture into the whipped cream in four increments, folding vigorously to incorporate with a spatula. Mixture will be lush and fluffy. Pour into prepared loaf pan and smooth top. Cover with plastic wrap, and freeze at least 4 hours or until set.

To serve, remove semifreddo from freezer, and let stand at room temperature for at least 20 minutes. Discard top piece of plastic wrap and the parchment paper up to release. Invert semifreddo onto a cutting board. Cut into 1-inch slices, as you’d cut bread, running the knife under hot water between cuts to warm. Slices will be pretty frozen still. Allow to sit for another 10 minutes before serving. Top with the graham cracker crumbles, a tiny pinch of cloves, and a sprinkle of pepita seeds for added crunch.

To store, remove semifreddo from pan, keeping the parchment lining intact. Place in a freezer bag, removing as much air as possible before sealing, for up to 2 weeks.

*Instead of graham crackers, try swapping in chocolate wafer cookies.